My flight to Athens was 2:30 and given the travel time to get to the Dubrovnik airport, I knew I had to get out of the Old City by noon at the latest.  I grabbed a quick lunch at Barba – this time a shrimp burger, which was excellent, and then headed out of the Plie Gate and into an awaiting taxi.  My taxi driver turned out to be a real Croatian history buff and excitedly told me various tales as we zoomed along the coast.  It turned out he was one of the soldiers who help protect Fort Srdj and proudly said his picture was in the museum there.

The airport was surprisingly modern and the check-in process was smooth except for the fact that I had to pay for my luggage, which turned out to be about $40 USD – ouch.  On the plus side, they were able to give me the exit row, which was huge as the plane wasn’t exactly big – oh and it was also a prop plane, something I hadn’t been on in a long, long time. 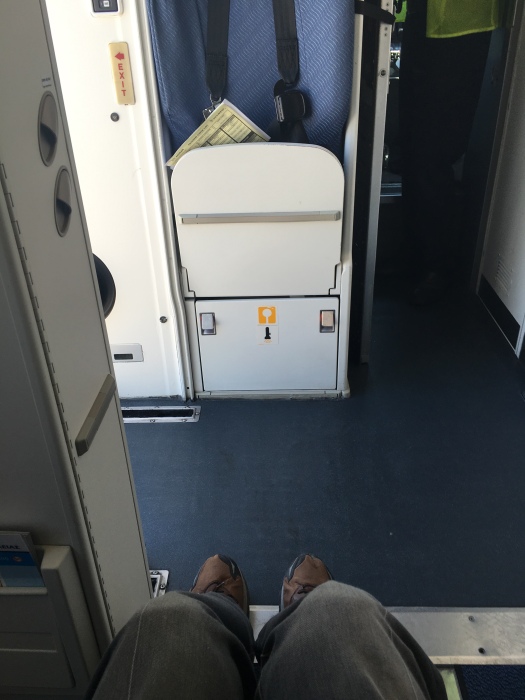 One of the advantages of being a prop plane is that for a large chunk of the flight we were a lot lower than if it had been a jet airliner so that meant I was able to get some great views of the Adriatic Coast. 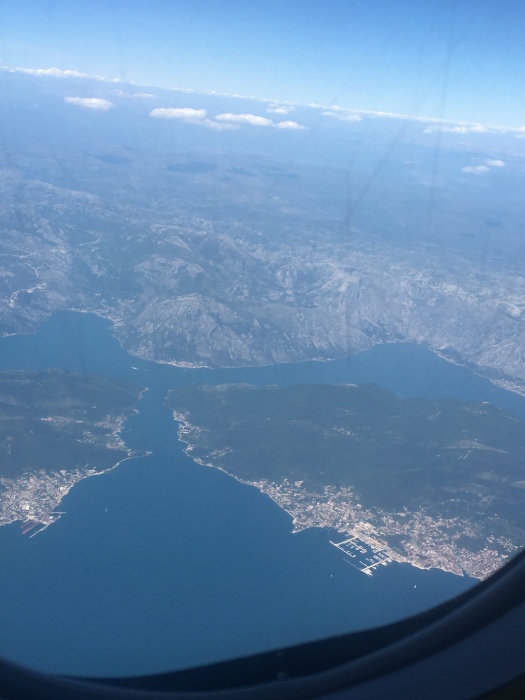 Upon descent I was also able to get some great views of Greece, including the insane number of boats cruising around the area. 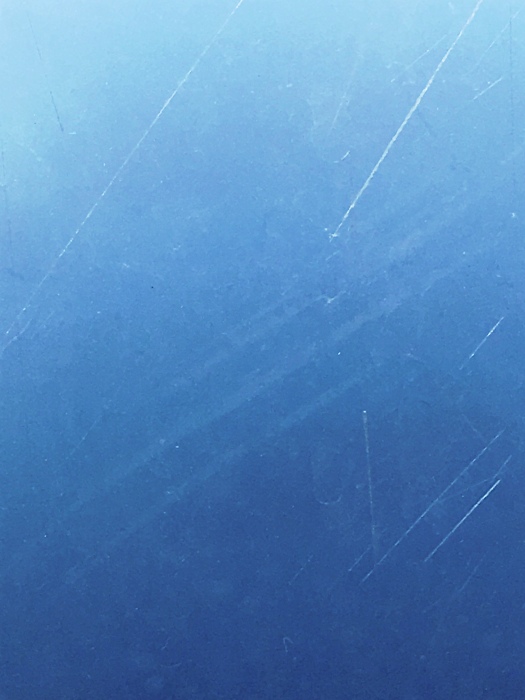 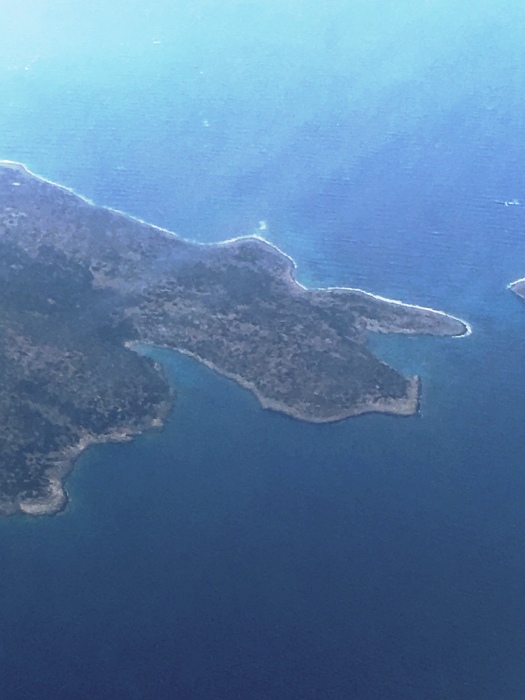 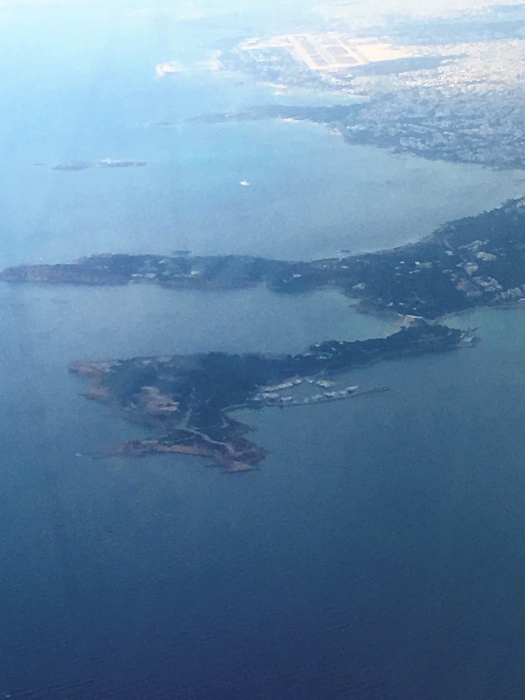 My initial plan of taking the metro to where I was staying was thwarted due to a strike so I had no choice but to take a taxi to the apartment.  My cabbie spoke no English and kept tossing his rosary beads whenever he was stuck in traffic or when we had to go around a different way due to a protest going on at the Parliament.  After about an hour, we arrived (sort of) at the destination, which he couldn’t find so he told me to walk from here.  Fortunately, it turned out not to be too much farther.

My Airbnb host, Alex, was there to greet me and show me around the apartment, which was a lot more traditional than I typically have but had a great balcony looking up at the Acropolis.  He had given me detailed maps and instructions on both the place and the surrounding area – including sights, restaurants and bars.  He said his favorite place was Meliltoso, which wasn’t too far from the place.  That sounded good enough for me so after orientating myself a bit, I headed up a graffiti filled alley to the neighborhood Psrri.

Psrri was a former ghetto that was now a hub for the hip and cool.  It reminded me a lot of Palermo Hollywood in Buenos Aires in terms of the mix of the old crumbling buildings and the new modern ones taking their places.  As I continued up the road, it suddenly opened up into a long pedestrian walkway lined with shops, bars and restaurants. 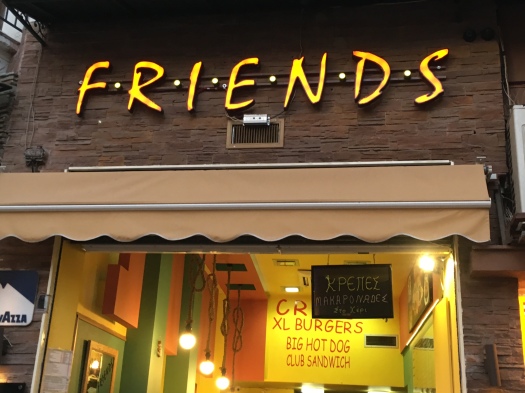 After about 15 minutes through this path, I arrived at the restaurant, which had a nice outdoor patio that was quickly filling up but I was lucky enough to secure a table.  It was a bit cooler than I thought it would be but still very pleasant to sit outside, albeit having to deal with near-by smokers.  There was a bar across the street playing some great soul and funk tunes, which added to the low key vibe of the place.  I decided instead of wine to do beer for a change and after being denied yet again for my first choice, I settled on a simple local pilsner that was quite refreshing. 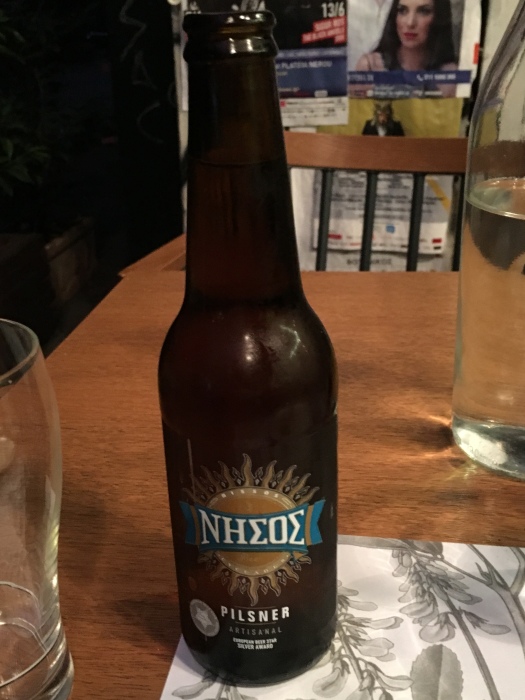 I’m a huge fan of Greek food and was very excited to try some from the source, and the menu had all kinds of enticing options.  I wanted to give my mercury levels a break, so I narrowed in on a couple of meat dishes.  I asked the server which she preferred and without skipping a beat suggested the chicken leg stuffed with cave aged Gruyere cheese from Crete and basil, tomato marmalade along with an “aromatic basmatti rice.”  Sold.

Now I’ve been all around the world and had many, many, many chicken dishes.  This was easily a top 5 of all time.  The leg had been deboned and the chicken was incredibly moist.  The basil and the cave aged Gruyere were perfect complements to each other, and the tomato marmalade, though sweet, worked wonderfully with it all.  And the crispy skin, oh the skin!  It was perfectly seasoned with The rice had leeks and green onions and tasted almost like fried rice even though it wasn’t.  Just amazing.

I walked back through the brisk night air and collapsed as it had been a very long day.  Tomorrow I would begin exploring the center of the city and perhaps see a ruin or three.