Today would be my final full day in Dubrovnik but with the crowds continuing to swell, I decided or retreat to the nearby island of Lokrum. I walked to the marina, hopped on the ferry and made the quick 15 cruise over to the island. 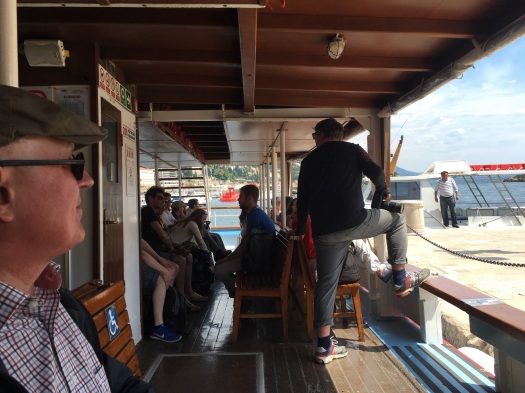 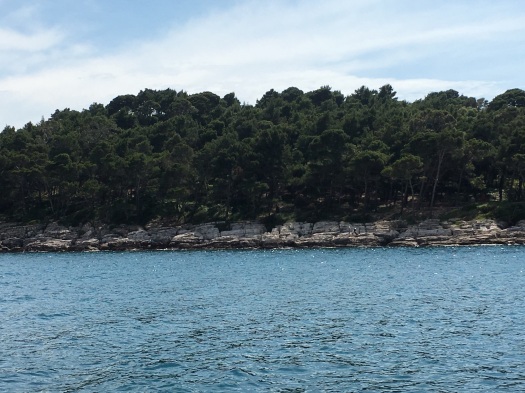 It was a bit hotter than I had anticipated and was beginning to regret my choice of wearing jeans. Still, there was a fairly consistent sea breeze as we pulled into the port so I was hopeful I would be cool enough.
Just past the port was a large map that highlighted the various sites on the island. I decided to go to the monastery first and began my trek up the trail. Lokrum’s first inhabitants were the Benedictine Monks who lived there from the 11 -18th century unperturbed. Their monastery dated back to the 16th century. 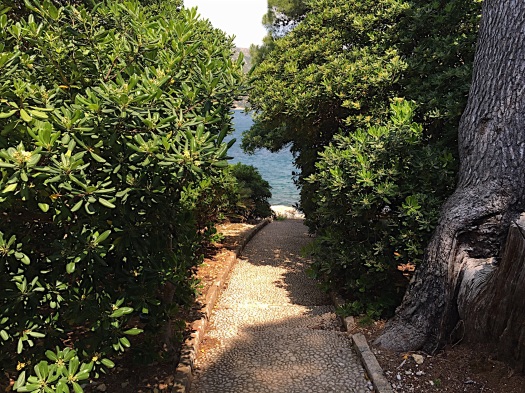 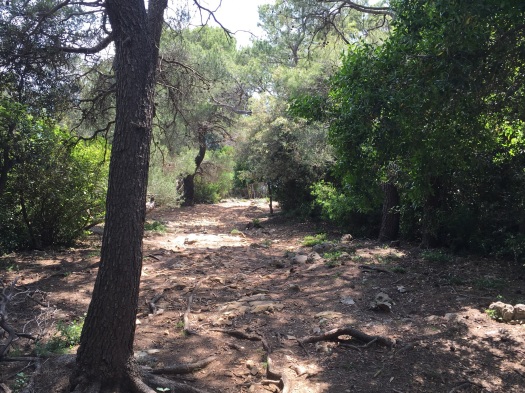 For some reason I had assumed the island’s pathways were relatively flat but that was decidedly not the case. The rocky road got steeper and steeper as I went along, along with a lot of loose rocks. My lack of hiking boots was a bit of an issue too. Still, there was plenty of shade and the sea breeze helped push me forward.

One of the first landmarks I passed was Charlotte’s Well, which was built as a tribute to his wife by the Austrian ruler Maximilian II when he purchased the island in the mid 1800s and was subsequently killed.  This was part of the dreaded Lokrum curse in which various owners of the island had met with death shortly after taking control. Eventually this led to the state taking over ownership in the early 20th century.

Maximilian also brought with him from the Canary Islands the most famous of Lokrum’s residents – the peacocks. I could hear the calls echoing around the island and even saw something new for me – baby peacocks who hopped along next to their mom as she walked the grounds.

Inside the monastery was a small museum that covered both the history of the island and a Game of Thrones section that showed the various Dubrovnik sites, including several on the island. Outside of the grounds was a nice park with olive trees and bunnies hopping around everywhere. 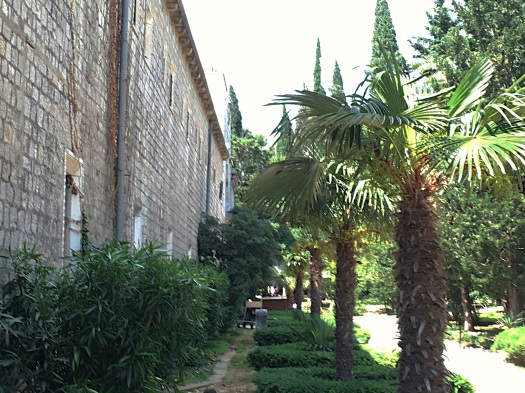 I moved past that section to the ruins of the original monastery and walls that were used as a sanctuary from the Black Plague. Beyond that was the Path to Paradise, a gorgeous wooded path that led back toward the coastline. By this point, I noticed the few people I had encountered had been turning around but thanks to my trusty Google Maps app, I decided to make the entire loop around the island.

This turned out to be a great idea as not only did it feature spectacular views of the coast and the Old City but I was also completely alone. I made my way to the end of the island where a cross dedicated to some lost seamen overlooked the bluff. 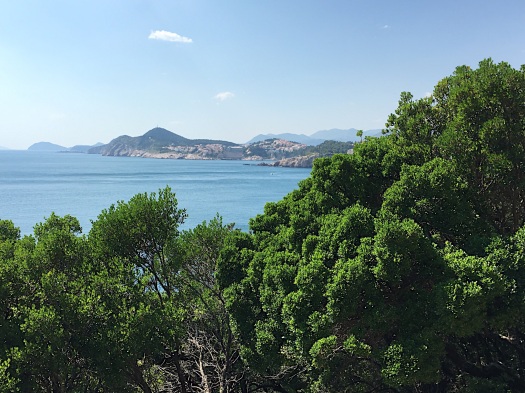 The terrain kept going up and down as I traversed the rest of the path before finally going on a gradual downward slope towards the port where I had arrived. Tired after my journey and not wanting to miss the next ferry, I joined the swelling queue and hopped on for the quick trip home.

I had an 8:30 dinner reservation but since the weather was still warm, headed over to D’Vino first for a nice cold glass of Posip. I hung out a bit chatting with Vanessa until just before my reservation, saying my goodbyes but promising to return after dinner. 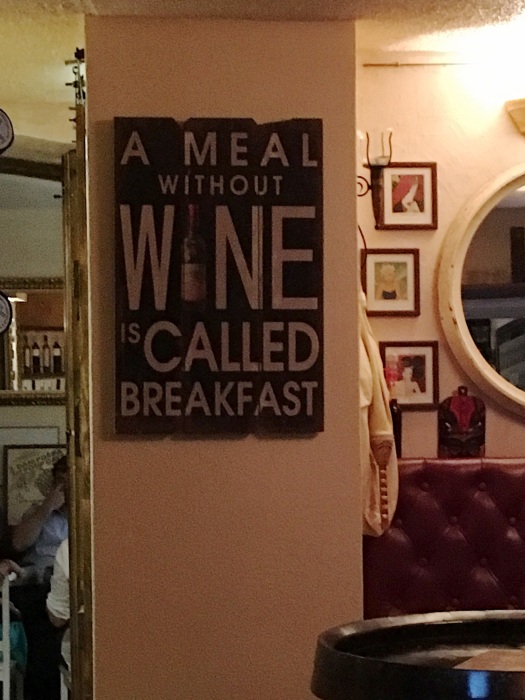 The restaurant Dubruvaka was over 150 years old and offered stunning views of the lit up Old City Walls and the fortress on the other side of the bay. I had made reservations so I was able to secure a coveted spot outside. 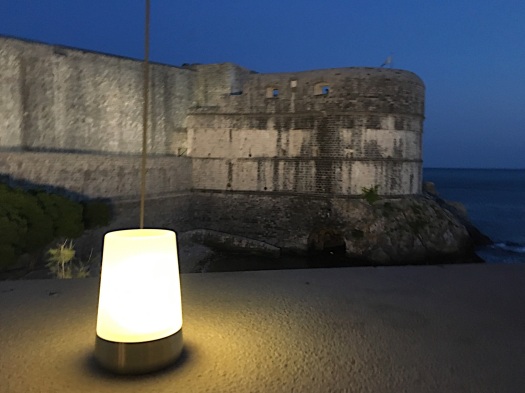 Not wanting anything too heavy, I opted for the spaghetti with Adriatic prawns. It was a simple but very tasty dish. A piano/cello duo was playing a mix of classics and new pop music as well as at one point the theme song to Game of Thrones. I was surprised it had taken that long to hear. 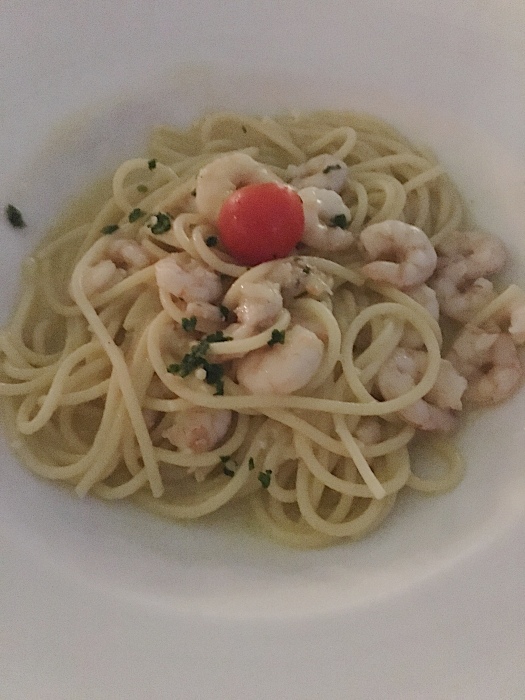 Although I wasn’t planning on a dessert given it was my last dinner in Dubrovnik plus the intriguing sounding Ferrer Rocher cake, I changed my mind. And damned if the cake didn’t taste pretty much that famous candy in cake form.

Full I walked back into the Old City and popped in to D’Vino once again. This time I had Anita’s suggestion of a Postup Gingac blend she had just added to the wine list. I also put in an order for a bottle of the first (and best) Posip I had in Croatia, knowing it would be impossible to find in the States unlike Bibich.

Although I was supposed to meet up with Danny and Violetta for a drink, I was fading fast. However, I did still have a final stop to make back at the Matusko tasting room, where I purchased a bottle of their great Gingac to also travel home with me. Tomorrow was getaway day and decided that having a hangover on a small prop plane to Athens was probably not a good idea so sleep won this time.