As I’ve taken longer trips like this one, I’ve learned that it’s a marathon not a sprint and built in rest days are crucial to being able to get the most out of it.  Today was going to be one of those days, or so I had planned.  After doing some work in the morning, I ventured forth through Psrri to head to a place that Alex had said was like his Greek grandmother cooking for him.  First up though was some more exploring, which became easy as the path to the restaurant was full of sights like these. 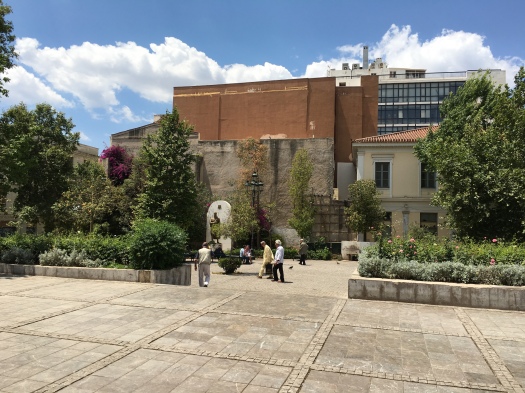 The restaurant turned out to be a bit tougher to find than I thought and by the time I finally found it, I was very hungry.  Tzitzikas and Mermigkas (Cicada and Ant) was named after the Aesop fable of the cicada, who sang throughout the summer and the ant, who concentrated on building things to prepare for the winter.  The restaurant was a mix of the two – artistic yet industrious.  They are most known for their tasting menus for 2 but despite my best attempts, I couldn’t get them to budge on making it just for one – oh well.  The restaurant was full of homey touches like the fact that my table had a drawer for the silverware.

I was first given a welcome shot of tsipouro aka raki, which is a Greek version of grappa.  It packed a serious punch but helped temporarily stave off my hunger pangs.  Like most Mediterranean cities, service was like another one of the Aesop fables, the tortoise, definitely not the hare.  Eventually, I flagged down my waiter and ordered the baby goat which had been braised in the same tsipouro and rosemary, along with some roasted potatoes and zucchini.

The baby goat was fall off the bone tender and rich with flavor from the broth.  The potatoes and zucchini were perfectly seasoned.  Just a great hardy plate of food and another great recommendation from Alex.

My initial plan was to walk over to the massive Syngtama Square but I noticed I was fairly close to the Temple of Zeus so I figured I would check that out.  It was noticeably hotter than earlier and not that much shade so I picked up my pace a bit to get down to the ruins where there appeared to be some shelter.  This was one of the ruins that were part of the Acropolis combination ticket, which I needed to buy anyway so might as well do it now. 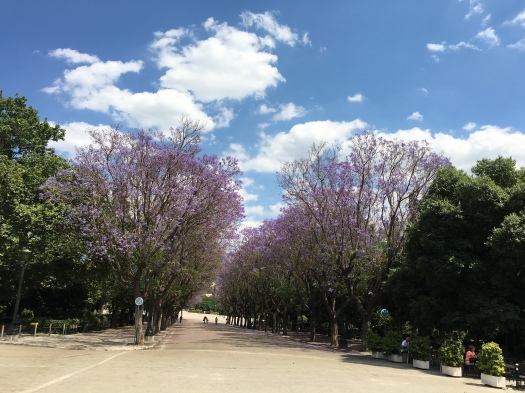 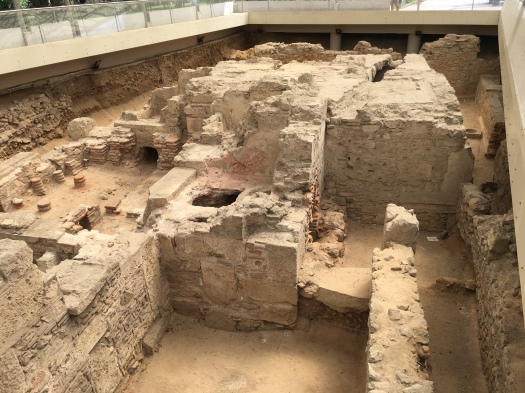 As I started to walk the grounds, it became apparent just how massive this temple was. 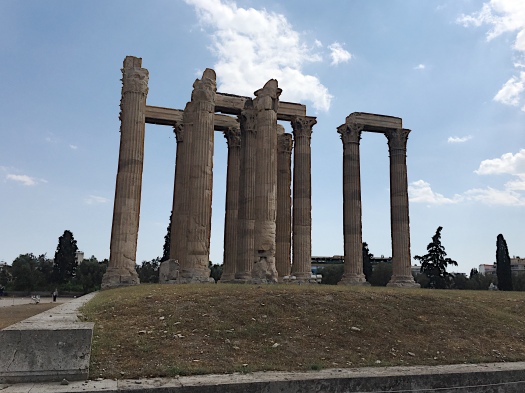 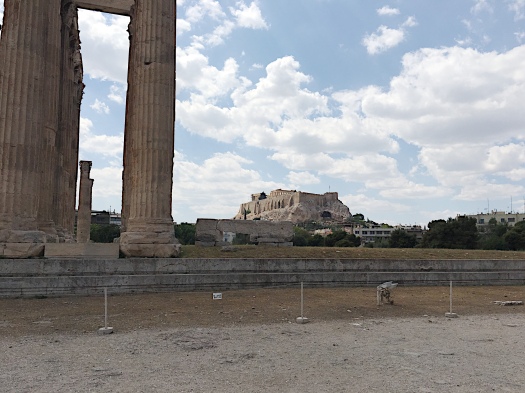 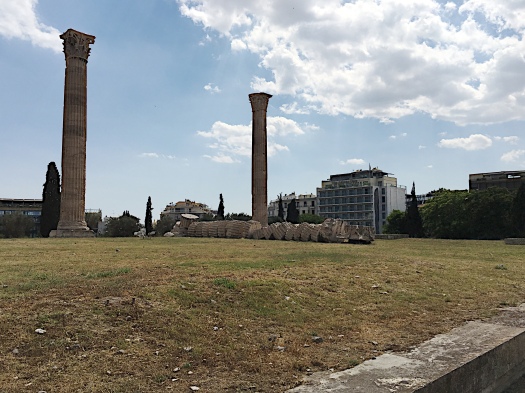 Also around the outer rim of the grounds were some other excavated sites.

After awhile, I left the Temple and walked over to the adjoining Hadrian’s Arch, which had a cool view of the looking Acropolis in the background. 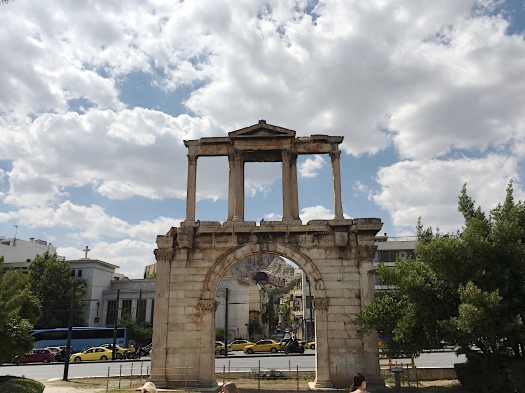 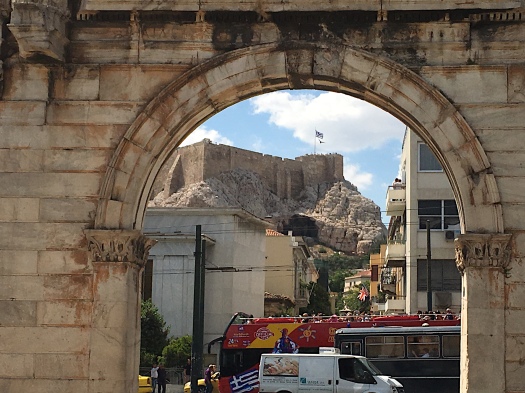 Next I walked up the hill to finally check out the Syngtama Square, which is a massive public square that also houses the Greek Parliament. 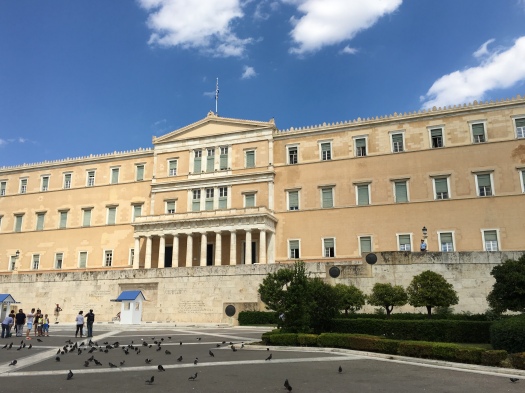 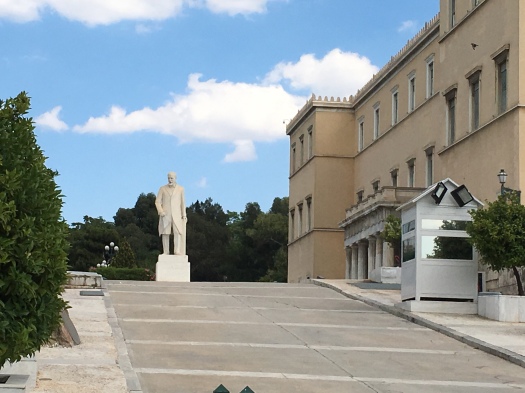 As luck would have it, I happened to be there right during the changing of the guards, which was quite the show. 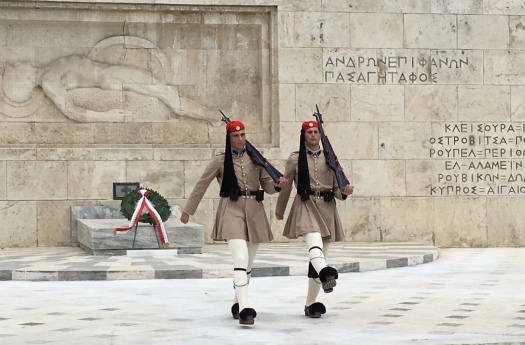 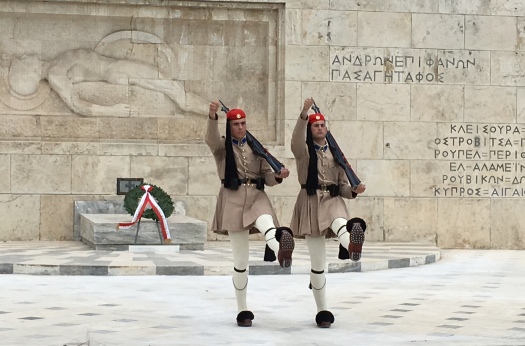 After the ceremony was done, I started to head to the nearby metro station as I needed to give my feet a rest.  As I went to look for some money for a ticket, I realized in horror that my 30 Euro Acropolis ticket had fallen out of my pocket.  I had a vague idea where it might have happened and raced out of the station to retrace myself.  Knowing this was probably a lost cause, I wondered if perhaps I could go back to the Temple of Zeus and see if I could get a replacement since I was just there. As Fates must have been smiling down upon as I was about half way there when I looked down and in stunned disbelief lay my ticket.  Whew!  Not wanting to tempt the Fates any more, I hailed a cab and headed back to my place. 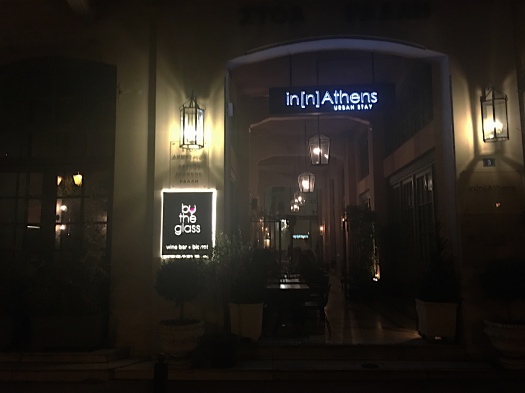 Alex had suggested a favorite local spot for Greek wine and good food called By the Glass, which I had stumbled upon earlier in the day and had made a reservation.  That turned out to be a good move as the outside courtyard was already full with well-heeled Athenians.

After conferring with the very knowledgeable and friendly sommelier, I decided to try a tasting of 2 different Greek varietal white wines.  I ended up much preferring the Assyrtiko from Santorini, which was crisp and refreshing.  I next switched to 2 Greek red varietals, which I told him to surprise me.  The younger of the two, Avgoustiatis from the island of Zakinthos, was much preferable to the other one selected, so much so I ended up asking to have it swapped out for another, which was much better. 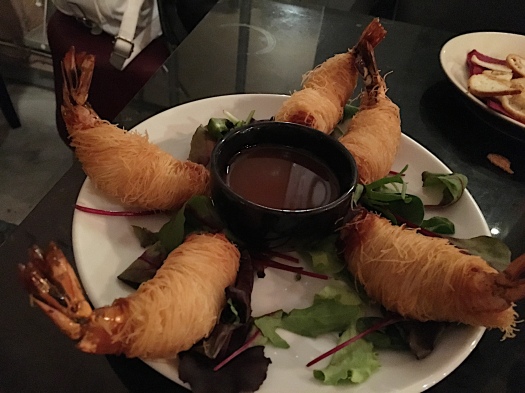 To eat, I had these fantastic jumbo prawns which had been wrapped in angel hair pasta and then quickly fried.  The first bite was a bit messy with the friend shoestring pasta going everywhere but the plump crispy shrimp were elevated by a truly outstanding sweet and sour dipping sauce.  I continued to be blown away by the level of cooking in Athens. 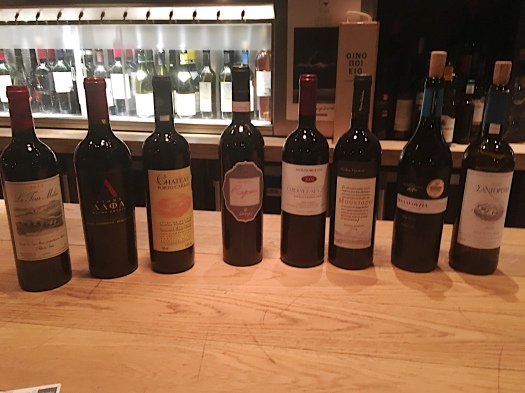 I continued to sample more Greek wine, this times some blends and by the end had a pretty impressive lineup.  I thanked the sommelier for his great Greek wine lesson and made my way back toward Psrri. Along the way, oh hey, more ruins. 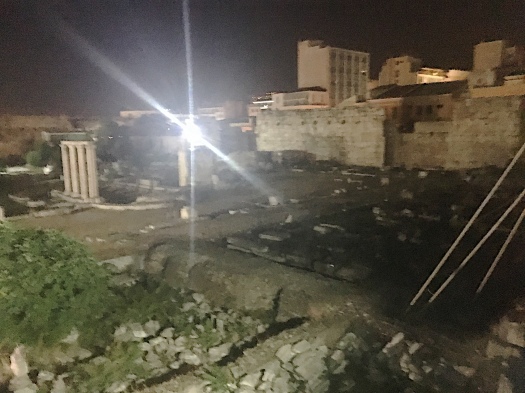 As I walked back to my place, I passed a bar where a guy with long hair motioned me over. Curious to find out what he wanted, he insisted that I join him and the rest of his group in a shot of tsipouro – when in Athens I guess.  Since I was there, I figured I might as well also order a cocktail favored by Athenians.  This turned out to be tsipouro and vodka, with lemon and peppers floating on top – a pretty interesting and quite tasty concoction.  Eventually I said my goodbyes and completed my journey home.  On the docket tomorrow were a whole bunch of ruins and museums so it was time to get some sleep.