I woke the next day and had a sudden urge for a good ol fashioned brunch. Fortunately, over the past few years Portenos had embraced the concept and there were no shortage of places to go. Opted for one of my old haunts, Magdalena’s Party which was a few blocks from me.

Known as one of the key hangouts for ex pats, it was fairly packed with people both in and outside having standard brunch fare. I decided to get eggs Benedict and a glass of mimosa of course.  Part of the charm of Magdalena’s Party is that their staff clearly enjoys a good party both during and off hours. This was evident in the slightly hungover vibe I got from my server. 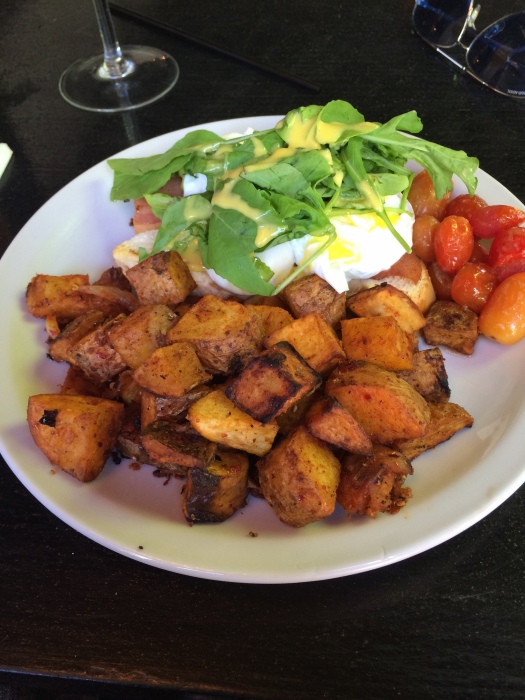 The eggs Benedict and roasted potatoes were great fuel to wake me from my lazy Sunday and I soon departed to walk around the neighborhood a bit more.

Eventually it came time for dinner and I excitedly walked over to one if not the best restaurants in Buenos Aires. Las Pizarras was a mere two blocks away and features various game meats cooked to absolute perfection. 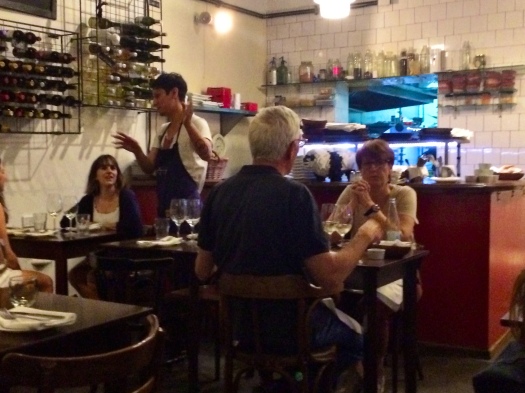 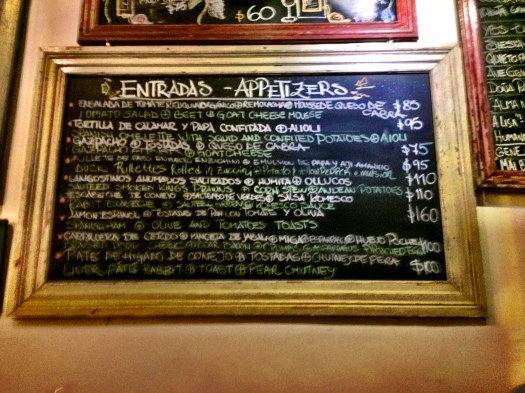 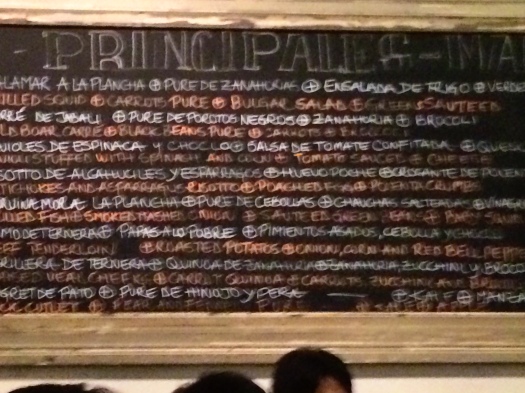 The menu changes daily and is displayed on 2 large boards (these are the pizarras) on either side of the room. As usual there were several items that looked great but after a quick consultation with my waiter, I ordered the braised pork shoulder with boar bacon, asparagus and a poached egg. It was another home run, with uber tender pork combining nicely with the smokey salty boar bacon. 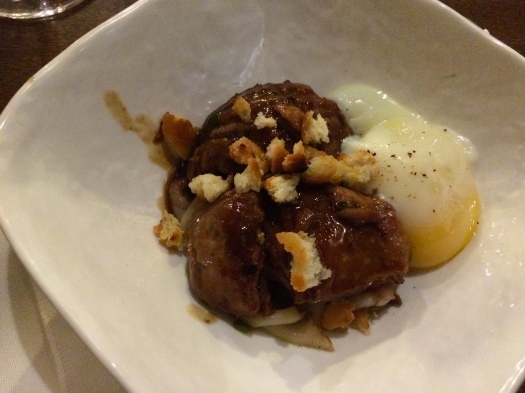 Like iLatina, Las Pizarras had moved up considerably in TripAdvisor so I wasn’t surprised to find the couple next to me, with their matching his and her hipster glasses, was from DC. 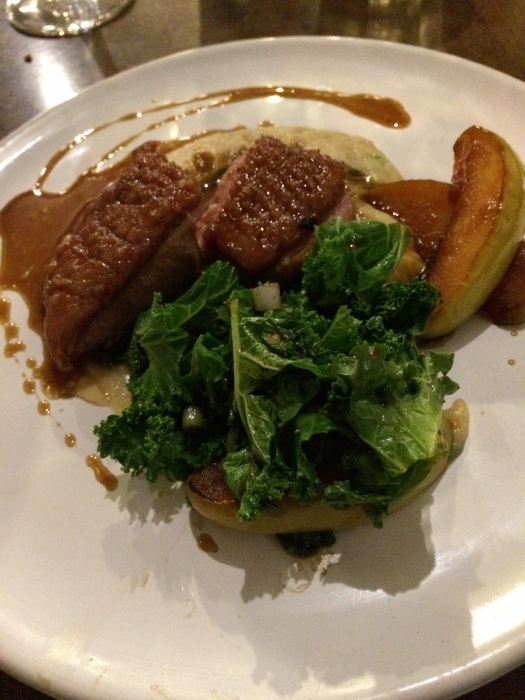 The last time I was at Las Pizarras, I had what was probably my all time favorite duck dish so when I saw the lovely word “pato” on the board, I knew that would be my main course. This time the duck was accompanied by a pear honey purée and roasted apples. While not the epiphany the duck was last time, it was still damn tasty.
After I gave my compliments to the chef and his staff, I walked down the street a few blocks to return to yet another place, Sugar Lounge. This is where Chris and I had caught some of the NFL playoffs and since it was almost time for Sunday Night Football, I thought it would be a great place to finally watch a game with some fans.
Unfortunately, the big crowds that had been there in the past were nowhere to be found. Slightly bummed but undeterred, I made my way a few blocks further down past Plaza Armenia to my final blast from the past. 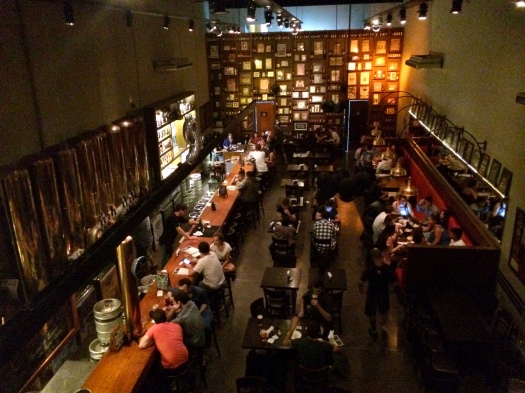 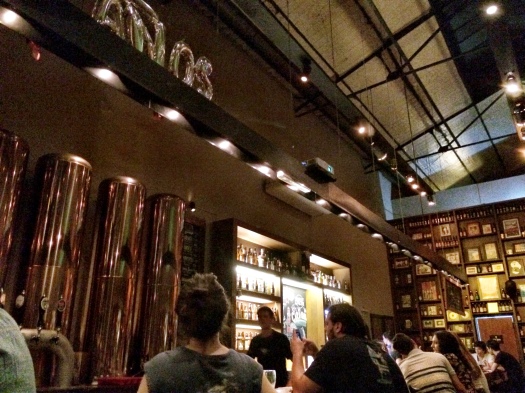 During my stay last time, the constant heat had made me long for a nice beer. Unfortunately, in Buenos Aires (as noted in my ill-fated trip to Taberna Odin) this is easier said than done. However, I had found the savior that I was now entering again – Antares Cevezaria. 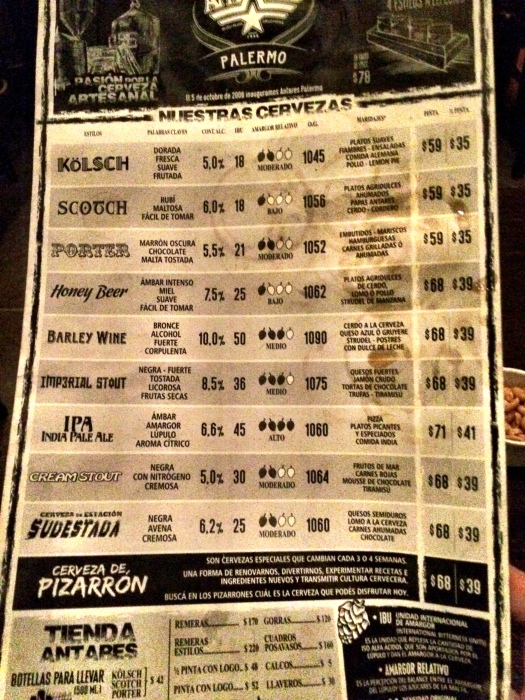 Antares was one of the first craft breweries in Buenos Aires to have their own brew pub. The headquarters was this one but there were several others throughout the city. They only serve their own beers but luckily they are all very good.

I first tried their new barley wine and found it to be pretty decent if a bit bland. Still compared to the swill I had previously, it was a marked improvement.

Next I had the imperial stout that I had enjoyed quite a few pints of in the past. This version was just as good. Actual flavor in an Argie beer!  Finally I tried their brand new double IPA and while it was a bit too hoppy for my tastes, I could still tell it was a well-made beer.  I said my goodbyes and headed home, ready to return to a bit more normal schedule in the week ahead.