Still nursing a bit of a hangover, I forced myself out of bed eventually to enjoy some truly great weather.  My goal today was to explore Palermo Soho a bit and soak up some rays.  But first, I needed food.

I walked down one of the main streets that led to Paraguay, taking a few pics along the way of the ‘hood and eventually arrived at a parilla called Simply Palermo.  Worked for me.

I got a nice table outside to enjoy the glorious weather and watch the highly entertaining show going on in front of me.  As noted in the photo above, it was a 4-way intersection with no crosswalks or stop signs, which resulted in total chaos when cars would get there at the same time.  I watched about 4-5 near head-on collisions along with much honking and yelling.  My favorite was when a cyclist would approach, assuming he had the right of way only to be quickly chased away by cars who clearly didn’t think he did. 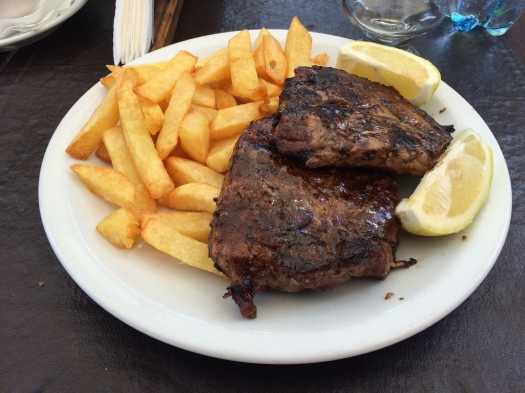 Since i hadn’t eaten a parilla yet, I of course had to order something from the chargrill but wasn’t quite in the mood for a steak.  Fortunately, they had another favorite of mine – bondiola – which is basically a large pork steak.  This along with fries seemed to be just what I needed to tackle the rest of this hangover.  I paid up and headed down the street towards the Plaza Serrano, stopping to take a few snaps here and there. 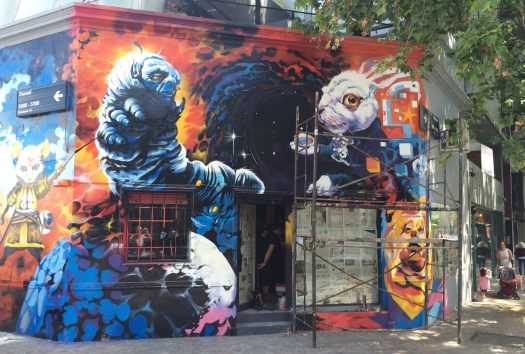 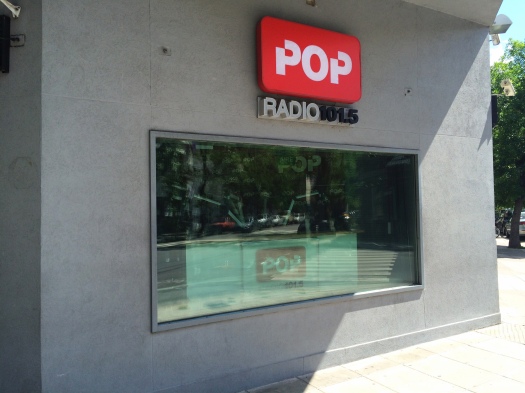 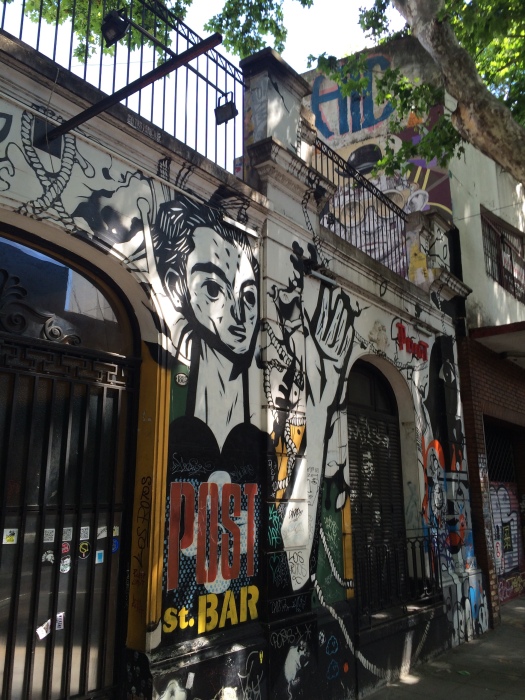 There was a weekend street fair going on at the Plaza, with both hand goods and clothes.

It was all pretty junky though so I mainly just wandered around, taking in the sights and sounds.  After a couple of hours, my feet started to ache so I made the walk back to the apartment for some rest.  I had a 9PM reservation for my last big meal of the trip that was coming up soon so time for siesta.

Aramburu is considered to be the grandaddy of all tasting menu focused restaurants in Buenos Aires, having launched with that concept exclusively over 9 years ago, as my server proudly proclaimed.  I was told the menu would be “around 12-13 courses” and focus on everything available at this time of year, which since it was spring meant the selection would be pretty diverse.

The first course soon arrived – 3 bites of an apple ravioli filled with blue cheese, a chicken pate ball made to look like a cherry and “sea” chips, which I was to pick from the corral around it. All 3 were good and a nice way to start the meal.

The second course was a carrot ravioli and a pork shu mai with a soy ginger sauce.  The ravioli was a bit of a mess to eat but delicious as was the dumpling. 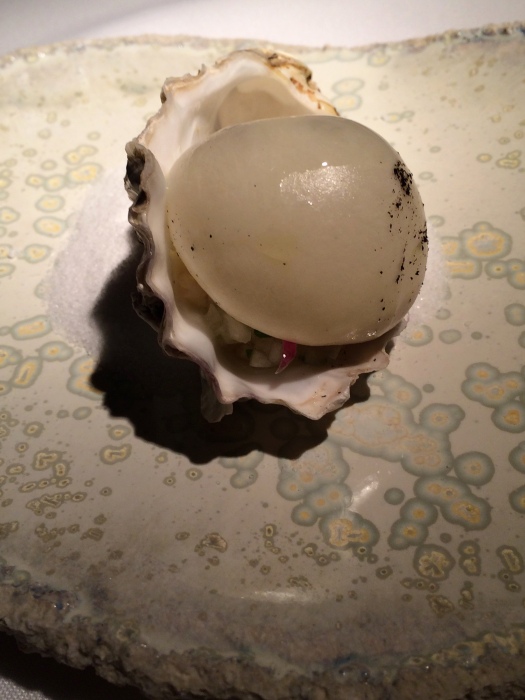 The striking presentations continued with the next course – an oyster “pearl”, which was oyster puree encapsulated to make it into an oval.  One bite though and the whole thing burst into my mouth.  Not a huge oyster fan but this was at least creative. 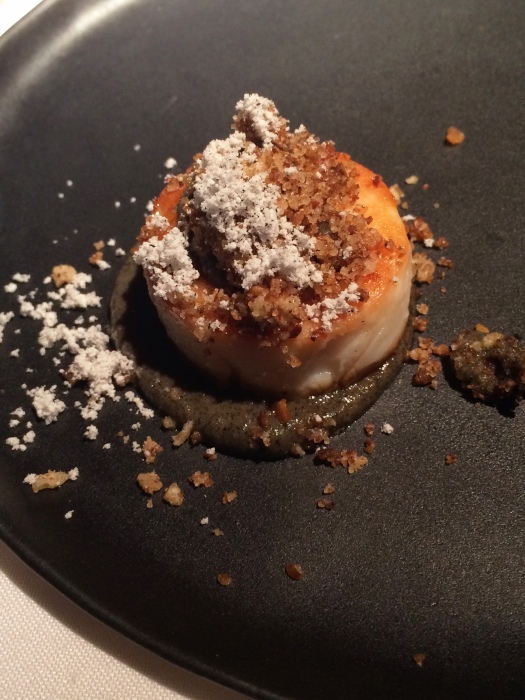 The fourth course – a scallop with eggplant puree – was the first time I was offered utensils.  The scallop was very tender and went surprisingly well with the eggplant. 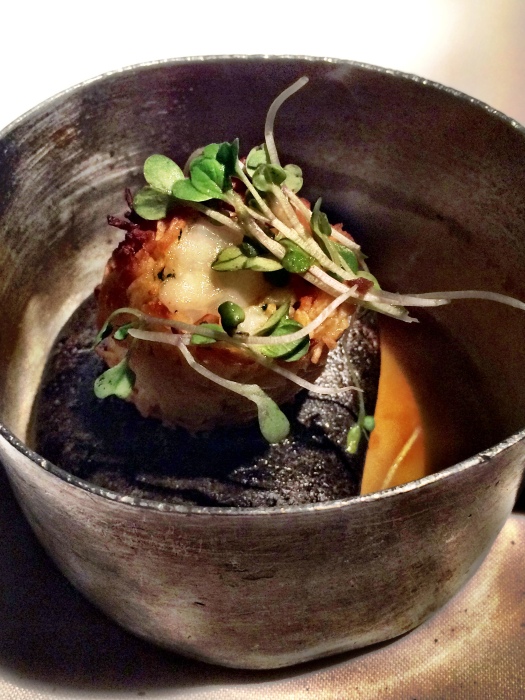 The fifth course, the server explained, was their signature dish, a shrimp roll with a grilled shrimp wrapped around ramen noodles then quickly fried.  It was served in a small pot with a hot stone, which then had a broth poured over it to send some lovely aromatic steam into the air.  I could see why they were so proud of it. 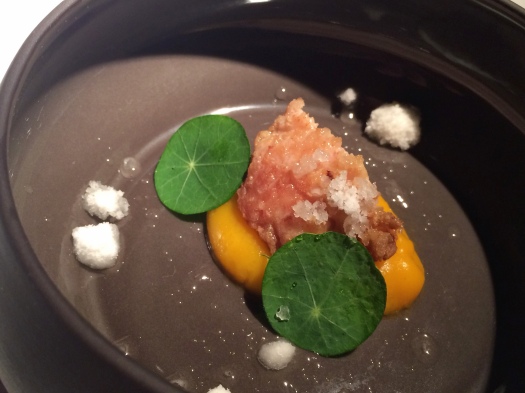 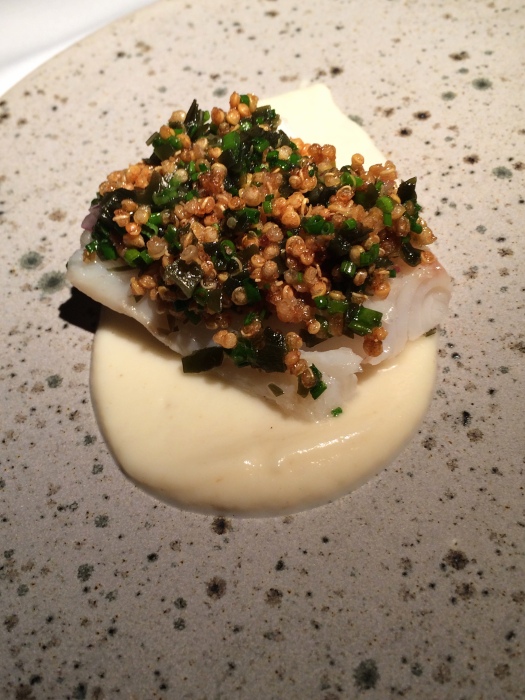 The seventh course was a piece of grilled white salmon filet with a celeriac puree and a pistachio crust.  Simple but well made.

Both the presentation and quality of the dishes jumped up considerably with the eighth course – 19 hour roasted suckling pig with a pear apple sorbet.  This was outstanding, with a playful presentation of the pork underneath leaves like a traditional Hawaiian pork roast.  Pork and apples go so well together so I wasn’t surprised when combining the pork with the sorbet turned out go beautifully together. 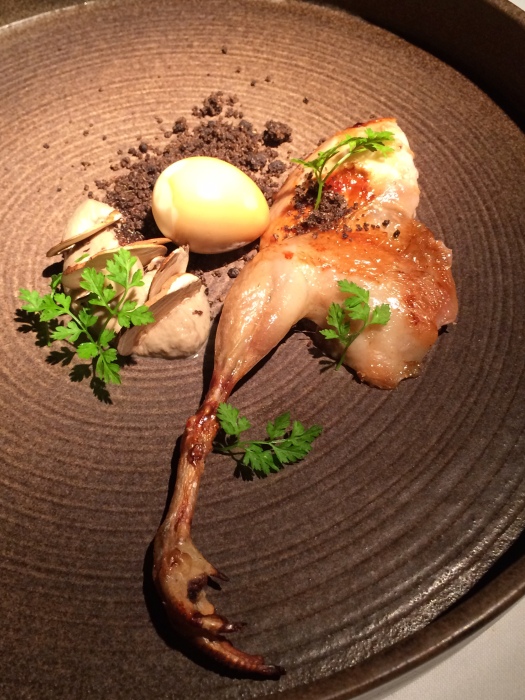 I actually gasped when the ninth course arrived – quail and quail egg with mushrooms.  I had never seen quail presented this way and so dramatically.  As one of my favorite game birds, this was a particular delight as it was perfectly seasoned and the earthy mushrooms were a great match with the deep flavor of the quail meat.

The last savory course could really only be some sort of steak, in this case a slice of filet mignon with grilled radicchio and mustard.  Nothing mind-blowing about this one – just a nice piece of steak and a side.

However, the next course, a palette cleansing sorbet of cucumber and a lemon granita was just that.  It was so good I ended up getting another order.  Not too sweet and with a huge burst of cucumber flavor, this was a stone-cold stunner.

The twelfth course was a raspberry sorbet with raspberry powder and a “wings of a bird”  As one might guess from the description, it tasted a lot like, well raspberries.  More points from the presentation versus actual taste for this one.

Fortunately, the final course made up for it – white chocolate ice cream with a vanilla panna cotta and white chocolate “nibs” with apple slices that had been marinated in whiskey.  Combining a whole lotta things I love into one dessert made this a can’t miss and it certainly did not.  Absolutely delicious and a worthy final course.

The final little bite would have made more sense if I drank coffee but was still tasty with the last bit of Malbec I had left.  Once again, a beautiful presentation.  As I finished up, I began chatting with the table next to me, who turned out to be cousins in town for a few days.  One of them was a foodie.  The other decidedly was not so most of the theatricality of the meal was lost on her.  I compared notes with the foodie one and gave her some suggestions for her final lunch tomorrow.  It was still early (well only midnight), so I decided to head back to Palermo and get a nightcap somewhere.

I had my cabbie drop me off in the heart of Palermo Hollywood and after a couple of unsuccessful stops at bars that had opened since I was last here, I crossed a few blocks over to one of my favorites, Olsen.  Tucked away on a quiet part of the street with a magnificent courtyard that extended to the open layout of the main room, it is a great spot to mingle or in my case, just have a nice cocktail in relative quiet. I finished up and opted to walk the mile plus streets home, working off my meal and enjoying the cool weather.