Over the past few years, a major target for my travels has been Croatia.  After I earned 100K points with my AmEx Platinum card, it seemed like it was finally time to make that a reality whilst being able to get there in style.  It turned out the easiest path both in terms of points and routes was to take a business class seat on Turkish Airlines, a new one for me.

When I arrived to the international terminal at LAX, it turned out to be a very good thing I had a business class ticket as the line for security was quite long.  Even with the separate first/business class line, it still took about 45 minutes.  I shuddered to think how long it would have been in the steerage line, which also seemed to have no separation for Pre Check.

The first leg would take me from LAX to Istanbul, a 12 hour flight made much more palatable once I saw the sheer amount of leg room my business class seat had.  This did not suck.

One of the heavily advertised features of Turkish Airlines’ business class is what they call “Sky Chefs” – which I’m fairly certain did not involve any actual cooking but they did look chic in the chef whites and matching toque.

A couple of hours into the flight, it was time for dinner, which started with a trio of appetizers – a crab cake, tomato and mozzarella, and beef kabob.  Not bad.

“A candlelight dinner high above the clouds” – inscribed on the electric candle holders.

I chose the salmon with celery puree and grilled zucchini for my main course.  The salmon was a bit dry but tasty, and the sides paired nicely with it. Afterwards I had a very nice piece of apple hazelnut bread pudding of which I neglected to take a picture. 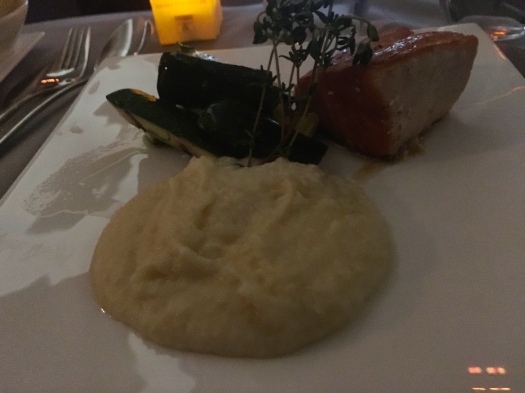 The other big advantage of being in international business class are the lie-flat seats, a godsend when taking a 12 hour overnight flight. Turkish Airline’s version included this fancy brochure of bedding options. 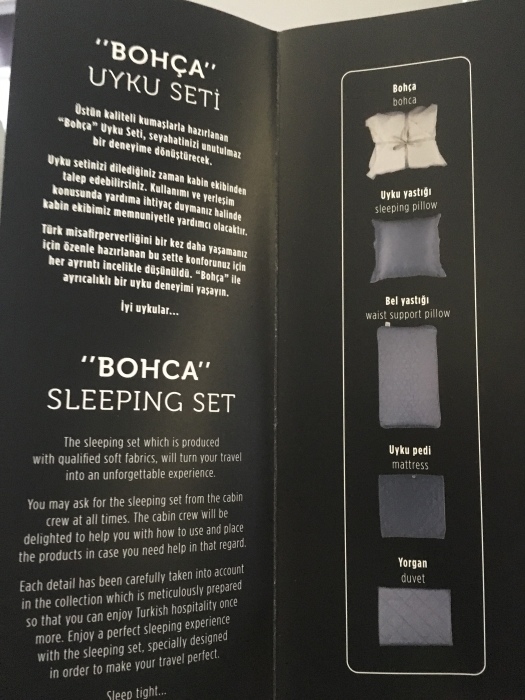 Unfortunately, my seat may have well been a trampoline thanks to the constant turbulence taking the Arctic route to Europe, as well as a seemingly endless parade back and forth by the Sky Chefs as well as flight attendants taking care of other business class passengers.  I was able to carve out maybe 3 hours of actual sleep so I wasn’t exactly refreshed when we landed in Istanbul exacerbated by the deadly combo of taking a 15 minute shuttle from the plane to the terminal and then arriving into this mess.

which turned out to be another crammed hallway to an equally crammed security checkpoint with very disinterested guards waving people through with no rhyme or reason.  I was more than ready to get back on a plane after that clusterfuck.

So much for my spacious seats.  The 2nd leg from Istanbul to Zagreb, Croatia featured, to put it mildly, much more Spartan accommodations.  This Turkish Airline plane’s “business class” seemed to be nothing more than the first 3 rows without any extra legroom.  Fortunately, probably realizing the scam, I was the only passenger so I was able to turn my first seat choice into this.

Still, it was only a bit less that 2 hour flight, which was good given that it was yet another bumpy ride.  By this time I was really getting tired of turbulence and after another rough landing was glad I was getting a 3 hour break in Zagreb before the final flight.  This time I would be on Croatia Airlines for a quick puddle jumper to Split – a mere 35 minute flight.  I was once again all alone in “business class” but this time opted to just take the aisle of the first row.

Once again, it was a pretty old plane, with a messed up monitor that made the crudely animated safety video look like an acid trip.

I was picked up at the airport by a friendly old man who spoke very little English and made the rainy 30 minute drive to Split.  There I was met by my Airbnb host, who guided me into the old city since cars aren’t allowed.  The reviews weren’t kidding when they said it was centrally located as the famous Dioclientian Palace was literally next door.  By this time, it was past midnight and I quickly collapsed into a deep slumber.  The forecast for the next day indicated rain pretty much all day, which would be fine as jetlag would certainly be a factor.