Since the weather was still pretty cloudy (why had the weather gods forsaken me?!?), I spent the morning catching up on work and relaxing.  Around 2PM, I finally dragged myself out of the apartment and headed up to Parque Kennedy for lunch.

It was a bit cooler than the previous days but still a nice walk.  I had passed by an interesting looking restaurant the previous night and since I wanted something simple given my epic meal planned for that night, it seemed like the right choice. 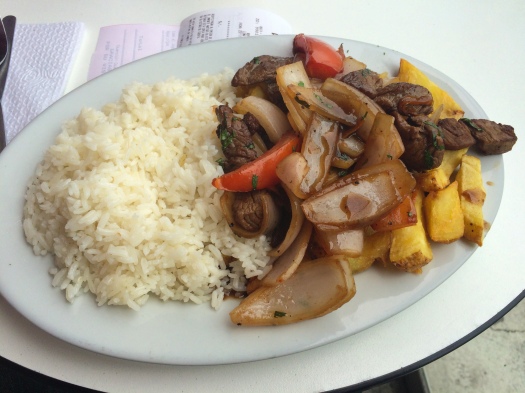 After trying to choose between a few items, I asked the server which was her favorite and she eagerly said it was the lomo soltado.  A glorious mix of Chinese and Peruvian styles, this version consisted of slices of beef tenderloin, red peppers and onions, all quickly cooked in a large wok, served with fries and rice.  It was stick to your ribs good and would be able to easily sustain me for the rest of the day.  I walked around the park, saying hola to the various gatos that permeate it, and then headed home for a siesta. 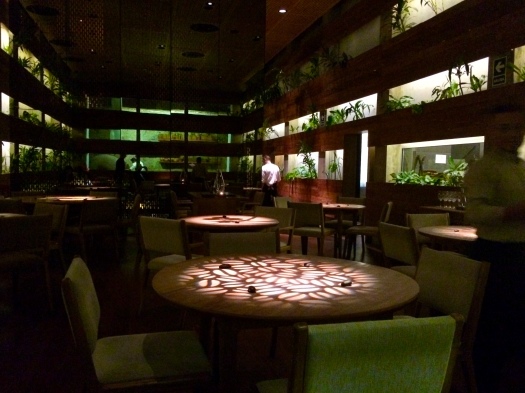 My dinner reservation was a bit earlier than usual – 8PM – but this being Latin Amercia, I was of course the only one there exactly at that time.  Restaurant IK had just been voted one of the top 10 restaurants in Latin America so I was very curious to check it out.  As shown by the picture above, the room was stunning, designed to look like a large fruit crate with tropical plants everywhere and a new age-y jungle soundtrack lowly playing in the background.

Given how much pisco I had imbibed on the trip so far, I decided to go with a local craft brew as my first drink.  It was a very nice and crisp amber ale that ended up going surprisingly well with the first few courses.

The Maitre d’ explained the concept of the restaurant that the 12 courses I would be served represented the 12 months of the year and would extend from the sea to the land to the jungle.  Everything would be cooked in a traditional Incan oven, which I happened to be sitting directly to through a large picture window. 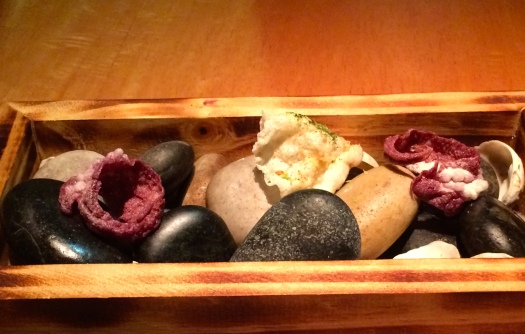 The first course was an amuse of the sea, which featured 2 “octopus” crisps (actually just a potato chip made to look like an octopus) and some crispy fish skin.  The attention to detail on the “octopus” crisps was amazing as this close-up shows. 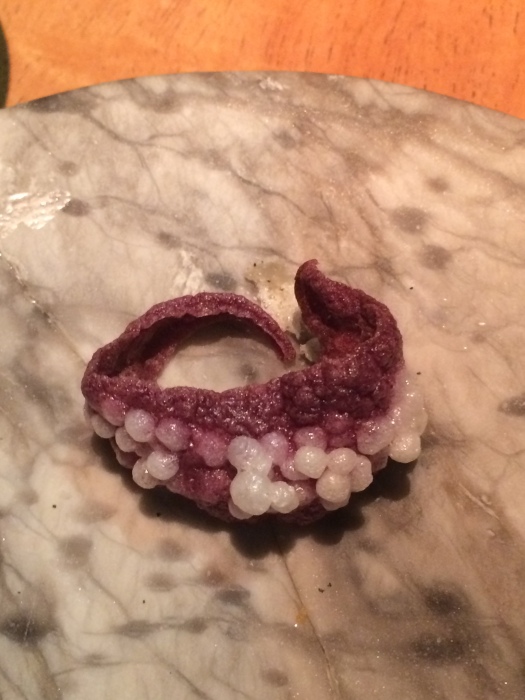 This was quickly followed by one of the more dramatic presentations of the evening. 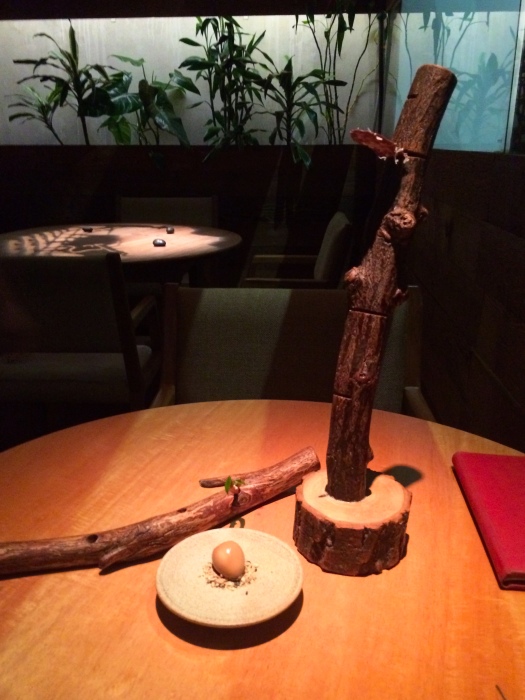 The server jokingly said this course would make me work a bit for it.  At the very top of the tree was a crisp made of wild mushrooms.  The small branch extending from the fallen log was actually a piece of pretzel.  Finally, there was a quail egg (this time actually a quail egg), which had been cooked 63 style (which makes the yolk and white the same consistency and then encapsulated so that when I popped it in my mouth, it burst with a wonderful rich egg taste.

Next up was a duo the Peruvian staple, potatoes, cooked over coals.  When the lid was removed, a huge plume of smoke filled the air with that wonderful aroma and the potatoes had a rich smoky flavor. 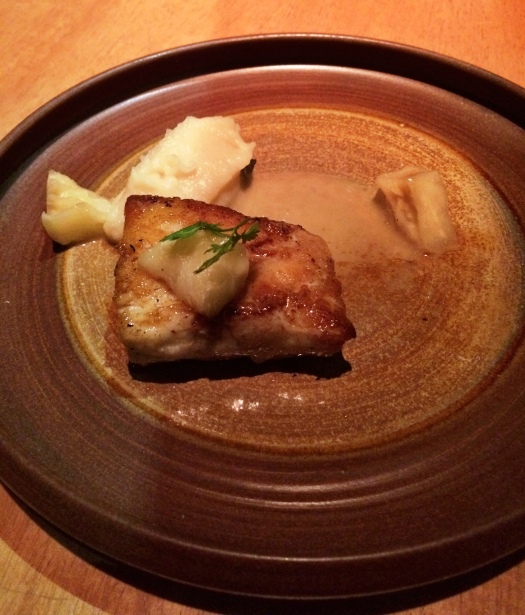 This was soon followed by a tender, grilled piece of robalo, which had been perfectly seasoned, and a puree of celery and celery root.  This was probably the most traditional dish of the evening but still great.

As way of a palate cleanser, the next course was “a medley of tomatoes” – with several different types of tomatoes with a tomato water broth.  I’m not usually a fan of a tomato dish like this but they were all so fresh plus the broth was so good, I ended really enjoying it.

Next was a real standout, grilled asparagus salad with an asparagus sauce.  Not only was the presentation stunning but it tasted even better.  The grilled asparagus was still hot and when mixed with the cool leaves around it and the sauce made for a wonderful combination.

Next up was a trip way into the Peruvian jungle with an Amazon white fish baked in leaves with an aged balsamic soy sauce.  The pot above it was filled with jungle herbs that one would smell if having this dish in its place of origin.  Again, the attention to detail was stellar.

What was also stellar was the service as it was around this point of my meal where I overheard the crabby older English couple behind me start complaining about the food. I was baffled how someone would book a reservation (required for here) and not get the concept.  After going back and forth with the ever-patient server, they demanded to see a menu.  The Maitre d’ finally agreed to give them a set menu from which to choose.  The Worst.

I ordered a half bottle of a Chilean Cabernet after being disappointing with a glass of Malbec, knowing that I was about to start into the meat courses.  This one unfortunately featured sweet breads, probably of my least favorite gourmet items.  Still as far as they go, this was a good version, with a spicy chili rub that contrasted nicely with the smooth white bean puree.

The final savory course was braised pork belly with a “celebration of corn” – corn puree, corn fritter and grilled baby corn.  The belly was a bit chewy for my tastes but the corn medley was superb and a nice way to end this portion of the meal.

The first dessert featured a variety of Peruvian fruits – maracuya, cherimoya and custard apples, both sliced and as a sorbet.  This was another great palette cleanser – light and refreshing.

The next dessert had one of the other more dramatic presentations – “cacao in everything”, which consisted of a cacao ice cream with Greek yogurt, candied cacao nibs and a cream sauce made with the white part of the cacao.  While I normally shy away from cacao due to its caffeine content, I went for it and was blown away by this dessert.  A true Peruvian classic.

The final dessert was a celebration of the Andean culture, including the server throwing confetti in the air and little chocolate bon bons.  And if that wasn’t enough cleverness, they next brought over this guy.

A figure of an Andean folklore hero, I was told that he had been sent to give me some final gifts, which were attached to the clothespins.  These included 2 chili chocolate bon bons, a bag of sea salt and a bag of cacao nibs.  I enjoyed the bon bons while sipping the last of my wine but noticed that the room was now almost empty.  I called my server over, jokingly saying they had abandoned me.  He replied “oh no, senor!  We knew you understood how us Latin Americans like to dine and left you alone so you could enjoy the rest of your wine.”  I couldn’t think of a higher compliment or more perfect way to end this wonderful evening.