After 2 very long and tiring (but of course fun) days, I decided to take advantage of Sunday being the traditional day of rest. The only thing on the agenda was lunch at a Japanese-Peruvian fusion (known as Nikkei) restaurant Maido. I had actually passed it the previous night after leaving Rafael so I made the quick 15 minute walk to the restaurant in the now ubiquitous cloudy skies. 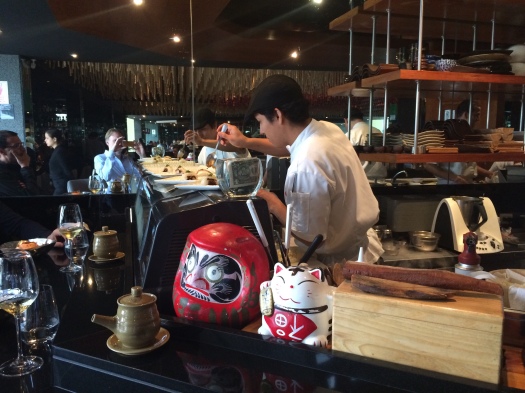 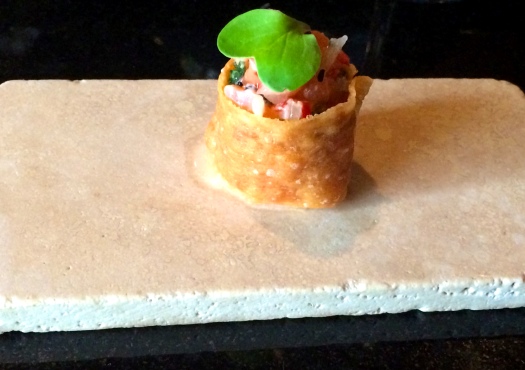 When I arrived, there was a bit of confusion about the fact I had changed my reservation but fortunately they had a seat at the sushi bar, which is where I wanted to sit anyway. I had initially thought about getting their Nikkei Experience but given I had a large meal set for my final night opted instead to order ala carte. While I was deciding, I received an amuse bouche of spicy crab, which was a nice way to begin the meal.

Wanting to take full advantage of the glorious seafood of Lima, I first selected the sashimi 12 cut catch of the day, which turned out to a lovely assorted of grouper, salmon belly, tuna, shrimp and octopus. While I normally eschew using soy, the sushi chef encouraged me to have some with it as it was a very high quality sauce. He was right although I still used only a bit per piece. Excellent.

Next I opted for one of the Nikkei specialities, salmon belly with aji amarillo. This is one of the best examples of the wonderful fusion between Japanese and Peruvian food, with the sushi quality salmon enhanced greatly by the yellow pepper sauce. Delicious.

It was now time for the main event, a 10 piece maki of crunchy shrimp, spicy crab, avocado and salmon belly with, yes, aji amarillo sauce on top. The crunch of the shrimp mixed with the lump crab meat and the soft salmon on top was a great blend of textures, enhanced of course by the great aji amarillo sauce.

My initial plan was to go get dessert somewhere in Parque Kennedy but thought I’d at least check out what they had to offer at Maido. I was immediately struck by the first item, named Egg and Nest. Given the impeccable presentations I had seen both from my order as well as those around me, I concluded it was a must to get that. As the picture shows, it turned out to be one of the most beautiful desserts I’ve ever seen. The “nest” was cotton candy with crunch strips of cacao as the cross branches and the “egg” was a sorbet of chiramoya – the “white” and a sorbet of maracuya (the “yolk”) with a white chocolate shell. It turned out to be surprisingly light given those ingredients and a perfect conclusion to a great lunch.

I made the walk back to the apartment, strolling more casually this time and enjoying the cool air. I opted to catch up on the blog, do a bit of work and overall just relax, allowing my aching feet to get some rest. Around 9PM, I was once again hungry but wanted something light and relatively healthy. I had passed a restaurant on the Malecon towards Parque Kennedy that looked decent so off I went. Called Alfresco, the place was fairly quiet with a few patrons, not surprising given it was Sunday evening. I decided to get the simple grilled filet of sea bass with steamed vegetables. This was exactly what I needed, light, fresh and delicious.

I headed up towards Parque Kennedy and along the way, I noticed a cafe that had pictures of some really nice looking desserts. Since my dinner was so healthy, I thought why not have something decidedly not for dessert. The winner was the vanilla cake “volcano” with hot dulce de leche inside. It was as good as it sounds.

After an aborted attempt to find the Bengals Cards game in Pizza Alley, I headed home to get some sleep. Tomorrow would be my last day in Lima and an epic dinner awaited.