After a few months off, it was time to get back in the saddle again and head once more to my beloved South America.  This trip would be particularly meaningful as it would take me back to where it all began.  It was just over 3 years ago that I made my first trip to Lima, which started my love affair with all things South America.  It was also where I realized I should really start documenting my travels in a blog, which I finally did when I headed to Buenos Aires for the first time a couple of months later.

My flights were predictably bumpy but not too bad overall.  I was using the “free” one-way ticket that was part of my Cartagena trip and thankfully had business class seats as even those weren’t exactly roomy. 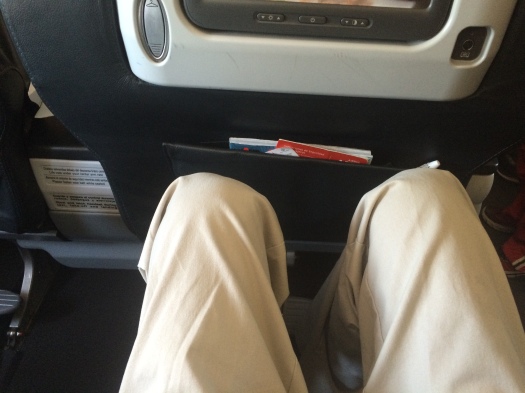 I arrived in Lima at just before 2AM and got to my apartment at 3AM.  The 3 hour earlier time on my body clock helped but I crashed pretty much as soon as I got into my bed. 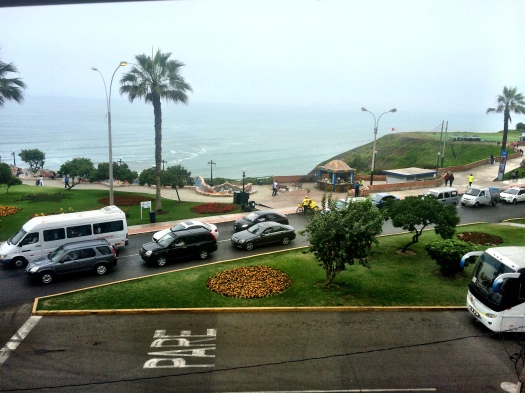 I awoke to a very loud and bustling street just outside of my window.  The view was spectacular but I realized it wasn’t a wise idea leaving the window open as the noise between the honking cars, birds chirping and passerby chatter, it was a bit much.

My first stop was a long-anticipated return to the glorious El Mercado.  The casual grill-focused spot by one of the most famous Peruvian chefs, Rafael Oestering and built in a former car repair shop features a dish that was life-changing for me – the grilled octopus.  But first, a pisco sour of course

Until I had their version, I had always shied away from ordering octopus as it can be very chewy in the wrong hands.  El Mercado though boils the octopus twice, first in salt and water, and then with aromatics and Peruvian purple corn.  It’s then transferred to the wood-fire grill, which imparts a wonderful smoky flavor.  Adding to the smoky goodness, are mushrooms and Peruvian potatoes that are also grilled.  The result is simply one of my top 10 dishes of all time.  Tremendous.

Although I was quite satisfied with the grilled octopus, I noticed a new section called Sandwiches that given the low prices, I assumed were just small bite size ones, so I decided to try a couple of them.  First up was called “Bulldog Sandwich” – which was a delicious combination of pulled suckling pig and crispy crab with an aji amarillo (a Peruvian sweet yellow pepper.)  It was in fact tiny but packed with flavor.

The other one was called “Chicharron Asiatico” – which featured fried pork, lacquered shrimp, sauteed onions and once again the ubiquitous aji amarillo sauce.  After this incredibly filling small bite, I was done.

After a short cab back to the apartment, I decided to go walk around the neighborhood, starting with the Parque de Armor, which was right across the street. 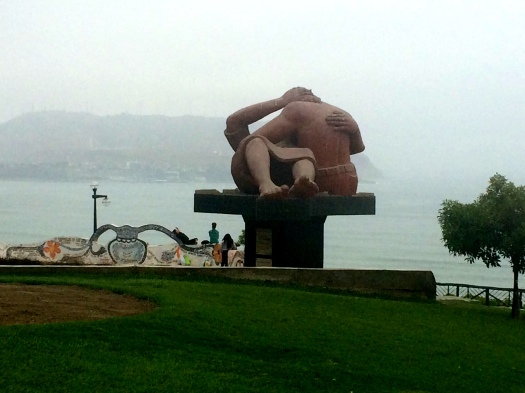 This massive statute gives the park its namesake.

The park extends along a cliffside, which makes for a spectacular setting. 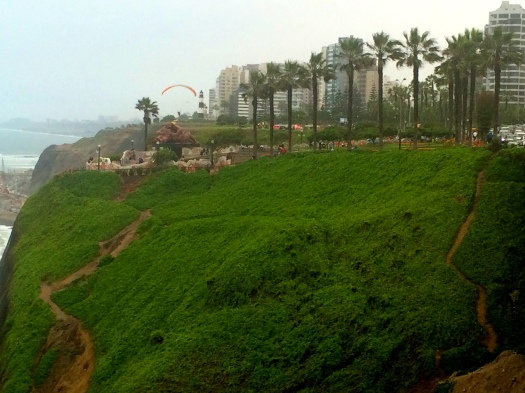 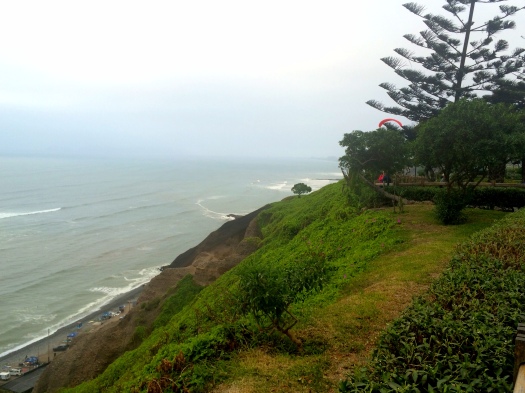 As part of my walkabout, I had also brought along my iPad, which I had dropped when leaving the Lima airport and was no longer working.  There is no official Apple Store in Lima but there were 2 places I had found that were essentially knockoffs.  The first one was shut down so I headed to the famous Larcomar Mall, where the other was located.

I normally stay away from malls as much as possible but the Larcomar Mall at least features a pretty stunning surroundings, hanging off the Pacific.  Not surprisingly, this store also couldn’t help me and suggested I go to something called CompuPalace, which was located just past Parque Kennedy.  That was going to be on list tomorrow so I made a mental note to add that to my agenda. 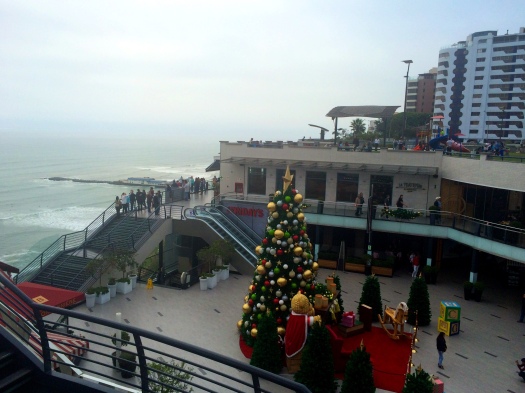 I decided to take the scenic route home along the coast. 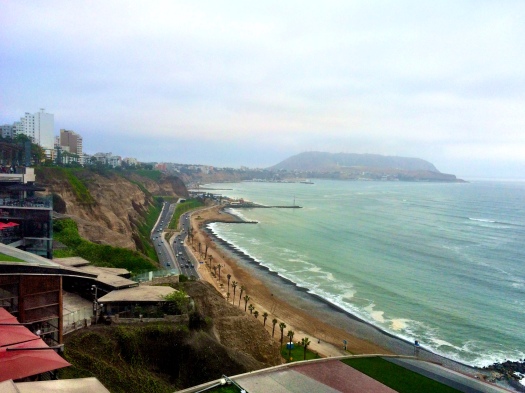 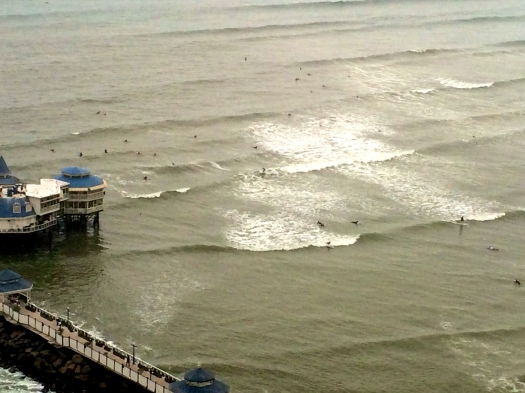 After a much needed siesta, it was time to head for my first dinner in Lima.  Wanting to mix both new spots as well as ones I went to last time, I had asked arguably the best Peruvian chef in Los Angeles, Ricardo Zarate, who is from Lima, what restaurant I shouldn’t miss.  He had enthusiastically said Fiesta Gourmet so off I went, using Uber for the first time which couldn’t have been easier, and cheaper to boot. 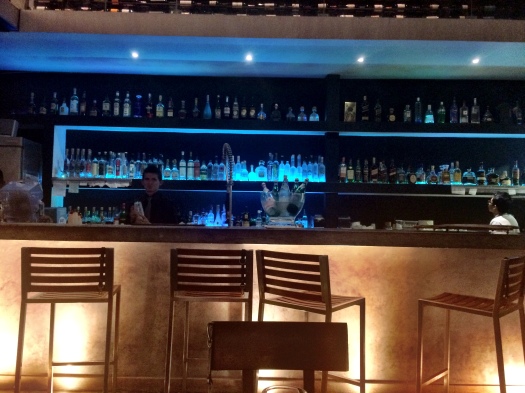 I was escorted to a table with a nice view of the quite stunning bar and wine cellar (although in this case, elevated on the 2nd floor.) 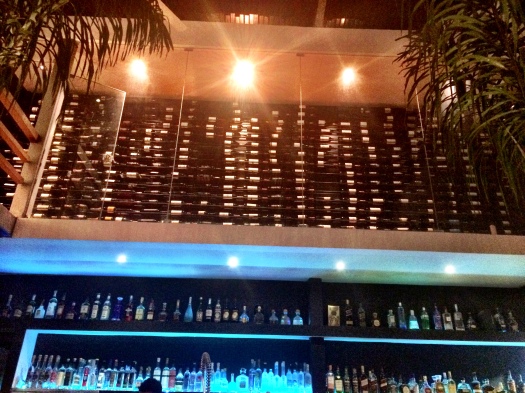 Featuring mostly Northern Peruvian food, the menu was divided between fish and farm animals.  Most dishes were designed to be shared family style, including whole massive fish, like the Peruvian grouper, which could be ordered via various cuts. 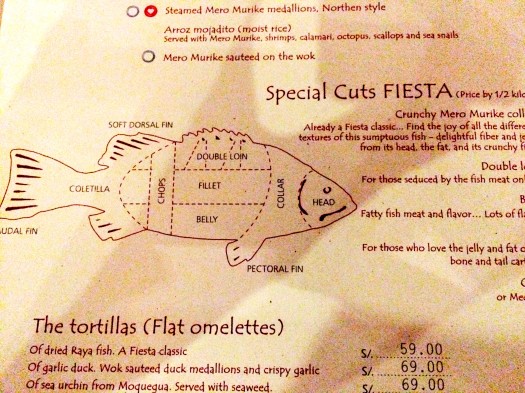 Of course, given I was alone, this wasn’t an option for me.  As I was trying to decide between fish or farm, I was served a welcome pisco sour along with an amuse bouche of slow cooked, shredded pork on a Melba-like piece of toast on top of a quail egg.

Wanting to try a bit from column A and column B, I decided to get the hot “ceviche” of medium-rare medallions of Peruvian grouper with the traditional flavors of ceviiche but grilled instead of cooked in citrus.  The grouper was wonderfully fresh and indeed truly did taste like a ceviche, only hot.

Next up, I choose a side dish of just the crunchy bottom rice of their duck with rice cooked in a clay pot with peas.  While there were no pieces of duck, the rice still had a rich duck taste to it and the fresh peas were a nice bright touch.

While I probably should have quit, I was intrigued by a dessert I had seen sent to a neighboring table and thought what the hell. 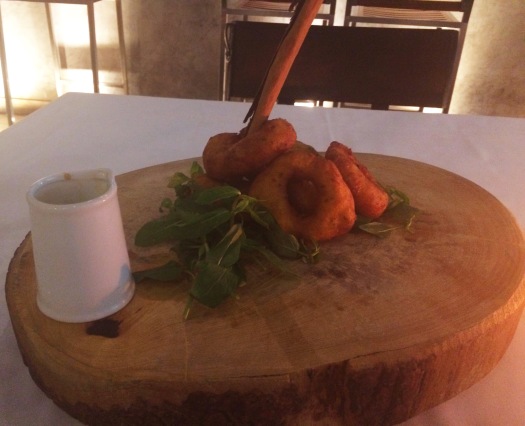 This impressive looking plate consisted of a pile of Peruvian style donuts, made with sweet potatoes and a fig honey dipping sauce.  The donuts reminded me a lot of beignets without the powered sugar and the dipping sauce added some much needed sweet notes as the donuts themselves were fairly mild in flavor.

A quick Uber ride back home, I hit the sack ready for a big day tomorrow.