The day started far too early as I had a 9AM flight to Panama City. On the plus side though that meant I could have a full day exploring Panama City. A short 1 hour flight later, I arrived at the Tocumen airport, located about 20 miles outside of the city. I was taken somewhat aback when I did my usual routine of getting some local currency from the airport ATM after it spit out good ol’ US Dollars. So much for having to use my converter.

After retrieving my luggage and going through a fairly simple customs process, I was suddenly surrounded by guys in lime green shirts which designated them as official taxi drivers. Once again there were no meters and I was told the fee would be $35. Slightly more expensive than my $6 airport rides in Cartagena! The route used a toll road and for some reason, the toll collector wouldn’t let our car through. This was followed by ten minutes of angry shouting back and forth. Good thing I didn’t need to be anywhere fast.

It turned out the driver had already paid $15 for tolls and was arguing that it was impossible he had already used that up. Finally sorted, about 30 minutes later, we arrived at the Hotel Manrey, which was located within the central part of the city. 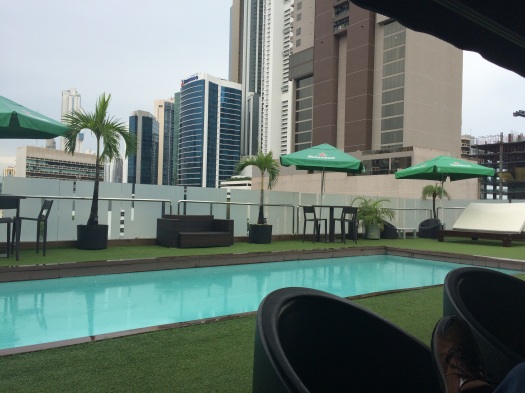 It was only 11AM by this point and my room wouldn’t be ready for quite awhile. I wanted to go check out the city but also needed some time to relax so I went up to the very nicely appointed pool and lounge. Around noon, I hailed a cab and headed to the Causeway, which was built with the rocks that were removed to create the Panama Canal. The Causeway connects three islands to the main city. I knew all of this because it turned out my cab driver was also a tour guide on the side. He also explained how after the US took over construction of the Canal in 1906 from the French who had been wiped out by malaria and yellow fever, Panama started to use US currency.

We passed such landmarks as Viejo Casco, the old part of the city; the Smithsonian animal sanctuary and the Frank Gehry designed Biomuseo – a multi-colored geodesic dome that was quite stunning. I didn’t go into any of said places though as I was hungry and my destination was towards the end of the Causeway, the famous Mi Ranchito. Known for its traditional Panamanian seafood, the restaurant was under a large palapa and once inside, it felt like I was more on a rural beach than on a concrete road across from glistening modern city.

One of the “new” dishes was what they called Ceviche Frito (fried ceviche) I was intrigued so along with that, I ordered a Panamanian beer my server had said was their best.

There wasn’t much of the way of what one would call “ceviche” but the fish was lightly fried and quite tasty. The pickled red onions on top I guess represented the citrus. Even better though were the very tasty yucca fries, a favorite of mine.

After a quick walk around the nearby dock, I was approached by a cabbie who asked if I needed a ride. My original plan with the Canal was to go there at sunset but fortunately my previous cabbie/tour guide had told me they close at 5PM. It was now 2PM so off we went. My cabbie offered to also pick me up when I was done and since I knew in the event he wasn’t there I could probably get another cab, I said sure. I told him to be back in 90 minutes. 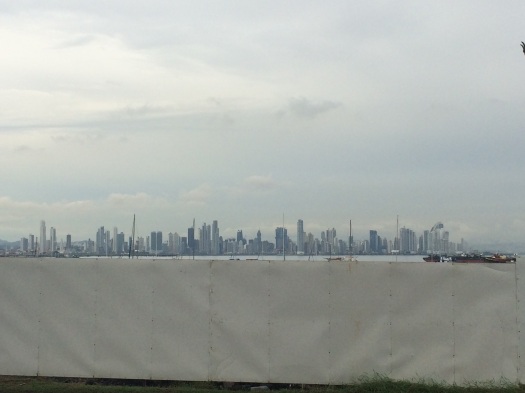 The Canal was located in a more remote part of the city, which except for some modern touches like the tourist center, probably is about to close to what it looked like over 100 years ago when it first opened. I saw that the admission which included the usual movie/tour was $15 but I had been told to just go to the restaurant on the 2nd floor. I tried to enter but was turned back as I didn’t have a ticket. It was as simple though as just asking for a free restaruant ticket. I got in the elevator and initially pushed 2 to go to there but I noticed everyone else was going to the 4th floor, which said observation deck. In a bit of pure luck, just as I stepped onto the deck, a PA announcement came on saying the next ship was about to go through the Canal. I had heard stories of people only getting to see small ships go through and while the process is the same regardless, it’s much cooler seeing a big ol ship like this do it.

The ship was carried into the first lock via these electronic train engines that had cables attached to them. They were built specifically for the Canal and cost $12MM each. Once safely inside the lock, the process begins of draining 25 million gallons of fresh water, at a rate of 2.5MM per minute, to the other lock which is on the sea water side. This is done strictly by gravity and as the water goes down on one side, the ship basically disappears from view. The transfer of the water means that any poor fish swept up in the process get dumped into the other lock, which meant that as that happened, tons of sea birds swooped down to get their snack on.

Once the water is now level on both sides, they open up the 100 year old gates and the train engines push the ship to the next lock.

The entire process takes about 10 minutes and then send about 50 vessels a day through the Canal at a price ranging from $850 for a sailboat to $250K for a large tanker. I was in awe of the whole thing. My inner child was doing backflips. 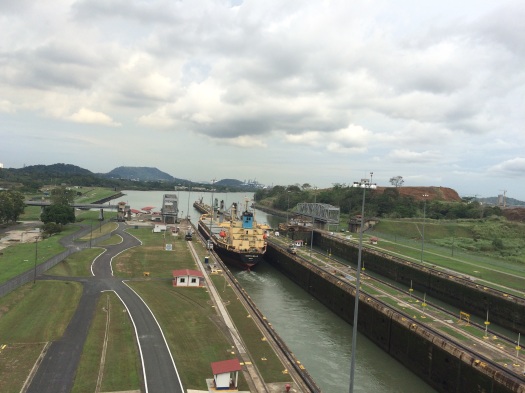 The final stage is to detach the engines from their cables and send the ship off to the Pacific. The crew on board waved to us and we waved back as they left the Canal.

I got luck again in that there happened to be an even bigger ship waiting its turn so I watched the whole thing again. This time though, it was on the other side of the Canal so I got a different viewpoint, including a much better shot of the ship “disappearing” in the lock. 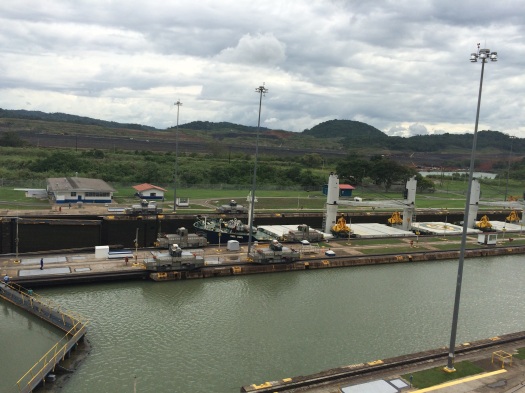 Satisfied by watching it twice, I left the deck and was pleasantly surprised to find my driver waiting for me. The ride to the hotel was very amusing as he kept trying to get me to stop at other parts of the city “you must see this! You want girls? You tell me, I get you girls!” All I wanted at that point though was to get into my hotel room and get in my siesta.

This turned out to be more challenging than anticipated as the first room I was given reeked of smoke. They gave me a free upgrade to a much nicer room but when I went to open my suitcase, I discovered that customs had graciously attached my zippers together with a ziptie so I couldn’t open it.  Fortunately, someone soon showed up to my room with a large pair of scissors and after a couple of minutes, my suitcase was free!

Between all of the traveling, my room and suitcase mishaps and the heat, I finally hit the proverbial wall.  My plan to explore my ‘hood was quickly replaced with going up to the pool lounge area for a simple dinner and to watch the Rockets playoff game.  It also helped that it was a Monday and most of the bars/lounges around the area were closed and/or dead.  So, I climbed into my very comfy king bed and got some much needed sleep.  Tomorrow would be the last hurrah and the long journey home.