I woke up to more grey skies but the forecast indicated this would go away by the early afternoon.  Since our apartment was short walk to the fairgrounds where Oktoberfest would soon happen, we made that our first stop of the day.  While walking, we past several fairly spartan hotels, and I wondered what sort of insane premium they would be getting for rooms soon.

As the main event was less than 3 weeks away, the main entrance was buzzing with energy.  I had somewhat foolishly thought we might be able to walk around inside the grounds but the security checkpoint made it clear that wasn’t going to happen.  Catherine had told us though there was a worker’s lunch spot that was open to the public so we went there for a quick bite to eat and of course, beers.

Affiliated with the Augustiner Brewery, the cantina had a limited menu but all I wanted was a hendl – roasted chicken, which was available for a mere 5 euros.  The downside though was there were none ready so we had to wait quite a bit to get ours.  By the time they finally arrived, we were so hungry both of us forgot to snap a picture.  It was nothing fancy but quite good, with crispy skin and juicy meat.  The beer though was the real star, a special Oktoberfest only version of the classic Augustiner light (Hell) beer that still had a lot of taste to it.

We decided to circle the grounds via a very pleasant pathway, which was filled with people jogging, walking their dogs or just out for a stroll.  Occasionally, there would be enough of a clearing to get glimpses of just how massive Oktoberfest is.

We eventually came to the other side of the grounds, where there was a massive statue and building to celebrate the Bavarian kings.  Chris climbed up to the top get some aerial snaps of the grounds. 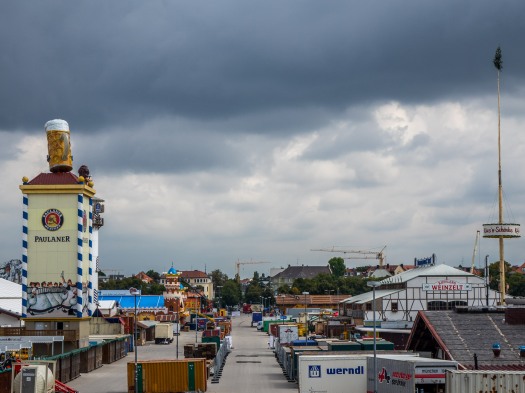 After a quick pit stop back at the apartment, we walked back down to the Marienplatz to see it during the day.  The weather had improved a little so we were able to appreciate the various Bavarian charms along the way. 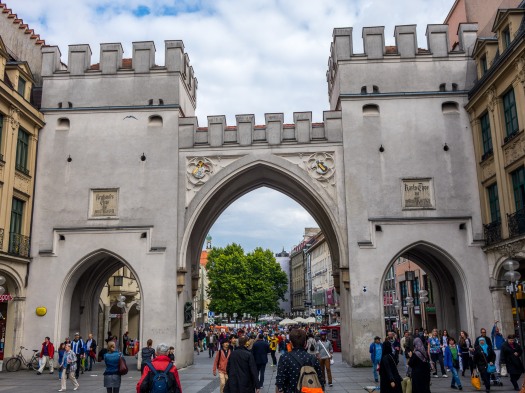 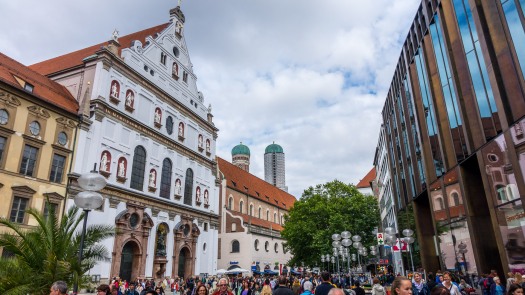 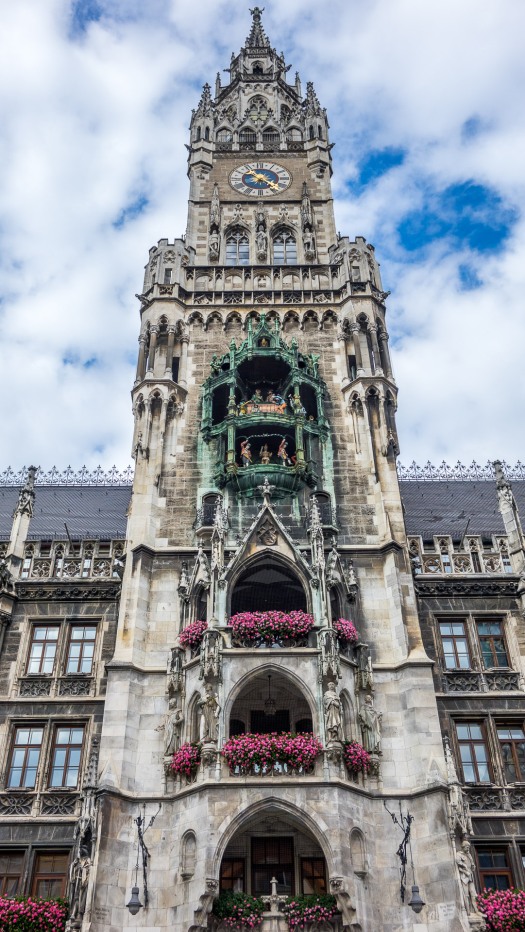 Chris was in search of an authentic Bavarian beer stein but my legs and back were begging for some more rest so I took off while he carried on with his quest.  I decided to take the tram back as I knew I’d be heading back that direction for dinner and took my usual late afternoon siesta.  Chris returned with his prize and some of gifts a bit later but clearly was spent so dinner would be a solo affair once again.

I wanted to take the SBahn because that’s how I’d eventually get to the Munich airport and made the short walk across the bridge to the closest station.  Google Maps gave me the direction of the train to take but to my consternation, that wasn’t an option on the scrolling train schedule.  Thankfully, there was a map nearby and I discovered that, for some reason, the direction of the train I wanted was labeled with the 2nd to last stop, not the final – very strange.

This metro car wasn’t nearly as nice as the one from last night but still very comfortable and I was soon back at the Marienplatz.  A light rain had begun to fall but fortunately my destination was close by.  Catherine had recommended it saying it had the best pours in all of Bavaria so that’s all I needed to know.  It was easy to spot as it was basically at the base of the famous double domed church. 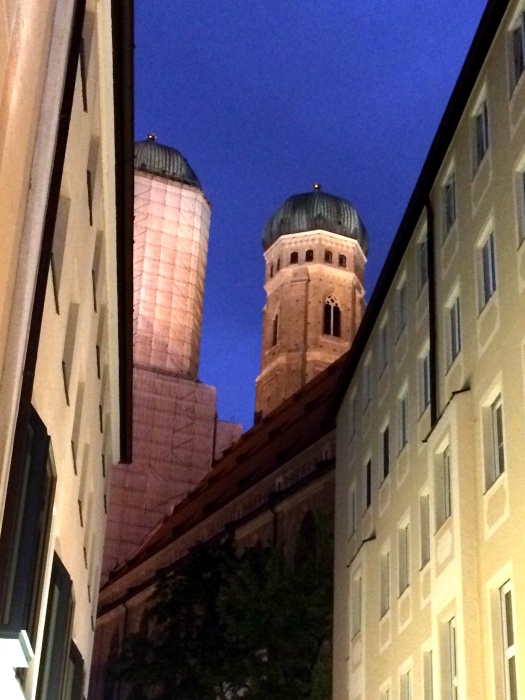 Bratwurst Gloeckl is a Munich institution, famous for pouring Augustiner beers directly from oak barrels, as the days of yore.  The main dining room was packed with loud and lively Germans sipping beers and having a grand old time.  Since I was solo, I was given a seat at a large communal table and said hello to my fellow diners.

First on the agenda, why beer of course!  I was surprised there were only 3 options – Augustiner dark and light, plus a 3rd beer that was from the tap only.  I started off with the dark beer, which had a great, frothy head and a wonderful balance of flavors – delicious.

Catherine had told me really the only thing to eat there are the bratwursts, with sauerkraut, of course.  I opted for the 6 bratwurst platter and a side of roasted potatoes.

Soon after I dug in, one of the women across from me, looking alarmed, asked if I liked mustard.  Oh, right, I had forgotten about the sweet mustard!  Thanking her for my oversight, I spooned a generous portion on the side of my plate, combining the brat, sauerkraut and the mustard into a delicious bite.  This was indeed the better way to eat them.

With the meal, I selected the light Augustiner, which was available only inside the main dining room and once again drawn from oak barrels.  It was nice and refreshing, and as Catherine had noted, the perfect mix of foam and temperature.

I wanted a 3rd beer but thought it would be fun to try somewhere else.  Unfortunately, by this point, the rain had picked up and the prospect of wandering around to find a new spot didn’t sound too appealing.  I walked back down to the SBahn station, encountering this fellow who apparently had just gotten off work from, uh, somewhere.

By the time I got back to street level, the rain had subsided a bit so I was able to walk across the bridge without being drenched.  Still, I wanted that 3rd beer so I decided to try out this Italian place that was next to the apartment building.  It was a charming old skool Italian restaurant, complete with a man busy with the brick oven making pizzas and grey haired waiters in ties buzzing around the main room. 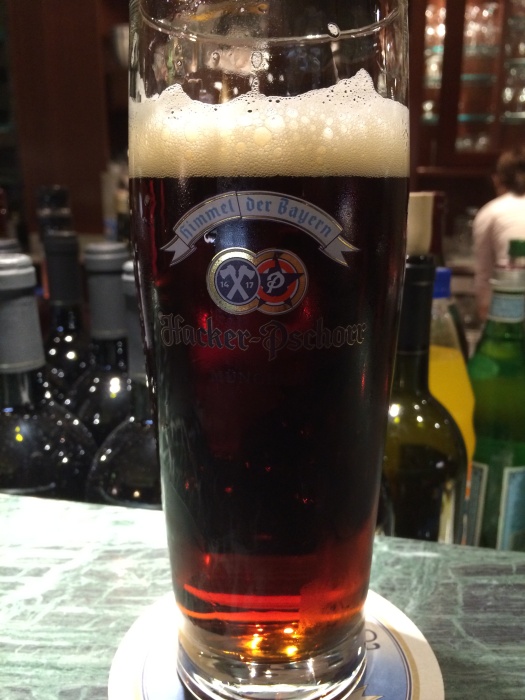 For my nightcap, I wanted to try one of the other local breweries, Hacker-Pschor, and had their dark ale.  It wasn’t quite as good as the Augustiner, with a slightly odd after-taste but still was a nice way to end things.  Tomorrow would be the trek to magic castles and Bavarian countrysides so it was time to get some sleep.