I woke up to the sounds of foot traffic clomping by my place and knew that if I was to make to the cable car before the masses, I had to hurry. Of course, that first meant climbing those damn stairs, this time all the way to the top. It was quite the workout.

It was a quick 4 minute ride to the connection point and I soon realized why it such a popular destination. Thanks to near perfect conditions I could see for miles in any direction, surveying not only the Croatian coast but also Montenegro off in the distance. 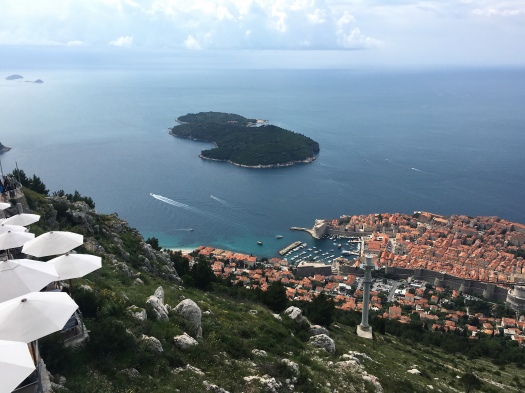 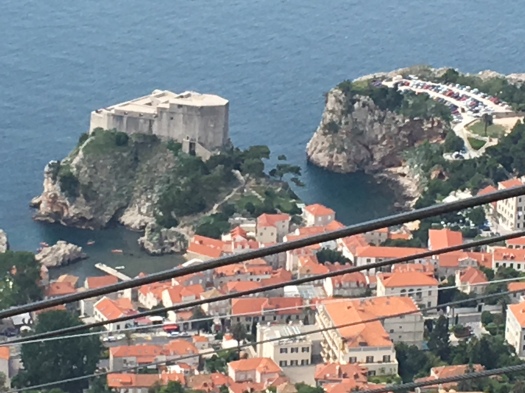 It is said that whoever controls Fort Srd controls Dubrovnik and I could see why it was such a strategic advantage. Originally built by Napoleon’s army, it was most recently used as a key defensive position for the Croatian army during the Yugoslav Wars of the early 1990s. Or as the Croats called it “the Bosnian-Serbian War of Aggression.”

Now it was used as a museum about the war, including a haunting video montage of reports during the siege of Dubrovnik. In 1991, Bosnian-Serbian forces attacked Dubrovnik for over 40 days. Residents hid behind the Walled City for protection, which worked for awhile until the Serbrian forces led a coordinated land, air and sea attack on the Old City, destroying many parts of it including the marina.

It was hard to believe this place of such beauty and wonder would ever be attacked like that.  Dubrovnik, in its original ancient Republic of Dubrovnik state basically created the concept of diplomacy, dispatching diplomats to work on its behalf.  It had always been in a relatively neutral party in the various wars, impenetrable because of the Walled City, until 20th century technology was too much for it to handle. 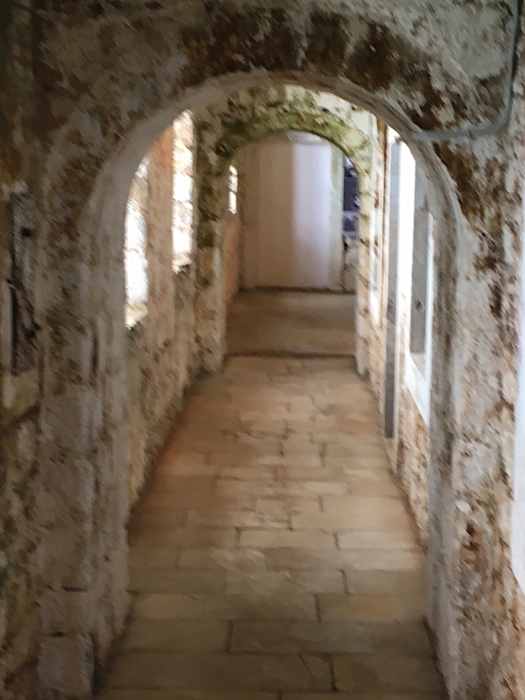 The scars of that war run deep in the city and in Croatia overall.  It was a stark reminder of the folly of war given nothing really came of it, except death and destruction.  The Croatian army forces used Fort Srd as their base of operations and used mules to bring up supplies.  I made the long climb up the fortress stairs to the top and could see why it was considered to have such a strategic advantage as well as why the desperately tried to keep it from falling into the National Serbian Army’s control.  The entire city would probably have been destroyed. 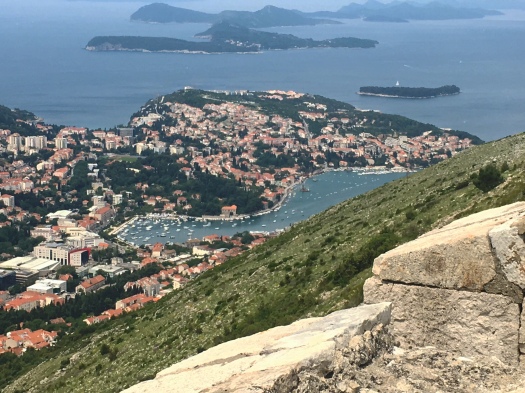 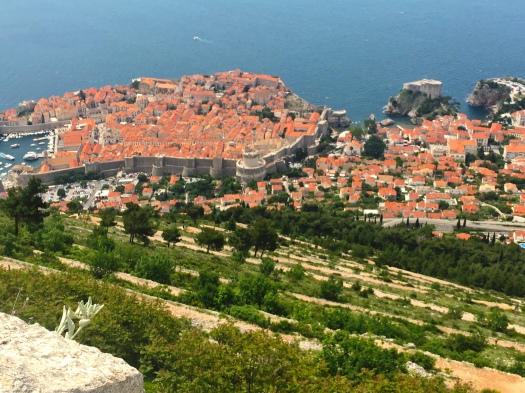 Lokrum Island, where I planned to go later in the week, was also visible.

After about an hour of exploring, I decided to head back to the Old City for some grub.  I took the short ride back down the mountain and once again descended the massive steps to the bottom.  I had read about an intriguing sounding place called Barba Seafood Street Food and their specialty, an octopus burger. 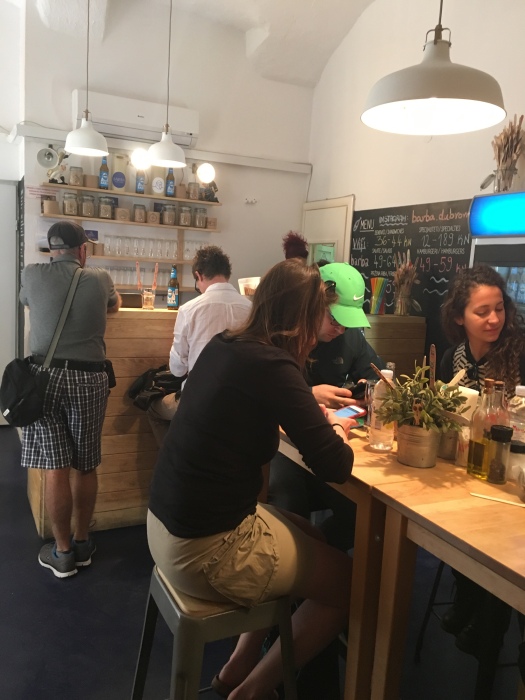 The tiny place was already full with lunchgoers but I had swung by earlier to ask about the octopus burger and the server recognized me, smiled and said “octopus burger coming right up!”  I made a mental note to follow up on her later since she was cute.

A few minutes later, my octopus burger arrived.  Basically ground up octopus with breading, grilled like a burger and on a really fantastic bun.  It was delicious.  I paid up and decided to walk around to a different part of the Old City I hadn’t seen yet, via the Ploce Gate, which ran along the other side of the marina.

As I left the Walled City, I heard some electronic music getting louder and louder, along with what sounded like a bunch of whistles.  Sure enough, across the street, there was a massive part going on, which turned out to be seniors from high school on their last day of class.  A nearby cop told me it’s an annual tradition and seemed to not be overly concerned with doing any enforcement work.

A bit further was Banje Beach, the only beach around the Old City where people jump off a cliff into the water.  The beach was similar to the one in Split, rocks and not very large, but I could tell must be quite the party spot during the summer.

I had been out pretty much all day so I retreated for a quick nap and some blogging.  I knew I wanted something more casual for dinner and decided to check out a place the manager at Bota said had the best pizza in town, Oliva. 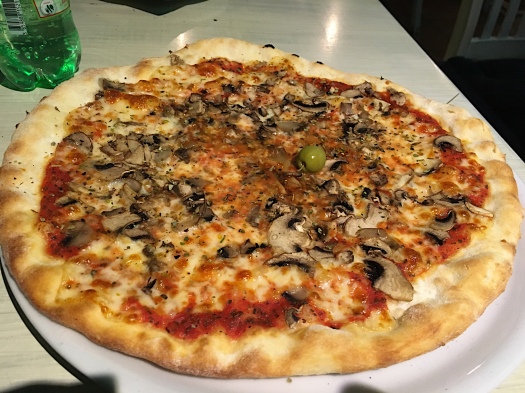 It turned out to be trickier to find than I had anticipated but the pizza I had with freshly foraged local mushrooms was superb.  I had a ticket to a nearby classic concert so I had to hurry finishing up and walking over to the venue.

It was the Dubrovnik Symphonic Orchestra playing at the Dominican Church.  I had purchased a ticket in the cheap seats because from the layout, it didn’t seem to be that large – at least in terms of the seating.  That turned out not to be the case at all but it was still fine even though the padding in the pew was woefully inadequate.  The night featured a guest conductor from Austria and a violin virtuoso from Russia.  The first piece was, natch, a violn concerto from Mozart, which was impressively played by the soloist.  Even more impressive is when he put down the violin and returned for a vocal piece as a contra tenor, a new one for me.

There was a brief intermission and then the orchestra returned to play the classic Beethoven’s 6th aka the Pastoral Symphony.  The conductor was highly animated and it was a very good performance.  They certainly had their chops.  Having that huge space fill with the sounds of Beethoven was pretty special to experience like that.

After the concert, I decided to go for a night cap.  As it turned out, right as I was trying to make my way over to a possible spot, I ran into the woman from Barba, who was just getting off work.  Deciding to strike while the iron was hot, I asked her what her favorite wine bar was in the Old Town.  I was planning to use her answer as a way to have her join me but she said “Oh I don’t know, let me ask my boss.”  So much for that plan.  She went away and her boss came back, suggesting a great place around the corner.  Defeated, I said thanks and set off to drown my sorrows in some hopefully good Plavic Mali.

It was a pretty funky looking place that turned out to a tasting room for a Croatian winemaker Matusko.  Once I saw the bottles, I realized this is what I had at Apetit at Split that I had enjoyed so I ordered a glass of the same Dignac Plavic Mali.  The manager gave me a hand-written sheet of paper with an explanation of Plavic Mali (it means little blue) and how they cultivate it.  Pretty interesting stuff.  As I enjoyed my wine, a man started chatting with the manager and after awhile, we started chatting as well.  He turned out to be the manager’s fiance and worked in the film industry, where he had gotten his start living 3 years in Los Angeles – small world.

We continued to chat and his fiance, Violetta, chimed in as well about all of the film shooting going on there now, like the next Star Wars movie, which had shut down the entire Stradun for a week and paid everyone off for about $6,000,000 USD – for what apparently will be a very quick scene. As we chatted, Violetta poured me another glass and later on two more.  By this point, it was after 1AM and I knew that I had to get out of there as I had a big day tomorrow.  I promised to come back later in the week and got their contact info as they will be coming to LA in December.  Not a bad recovery from my failed pickup attempt.