After waking up shockingly hangover free given the previous night’s festivities, I walked down in the drizzle to the marina for lunch at a Split institution called Buffet Fife. Located directly across from the fish market, the restaurant consisted of a series of long communal tables, where I was assigned a spot at random.

I knew I wanted some type of seafood but when I was informed there were already out of the catch of the day suddenly my choices were limited. I asked my server what a typical Splitian Sunday lunch would be on a cool rainy day and he smiled “The salt cod with mashed potatoes, no question sir.”

Now I’ve had that dish many times in the form of bacalo – typically as a croquette but I was surprised when the dish arrived as a mound of mashed potatoes. Still, once I took a bite, it was that familiar bacalo taste. The potatoes were ultra smooth and creamy, contrasted by the occasional chewy bites of the salt cold with some nice freshly chopped parley scattered on top.

In keeping with this working class meal, I selected a local Croatian dark lager, which was met by approval by my seat mates. 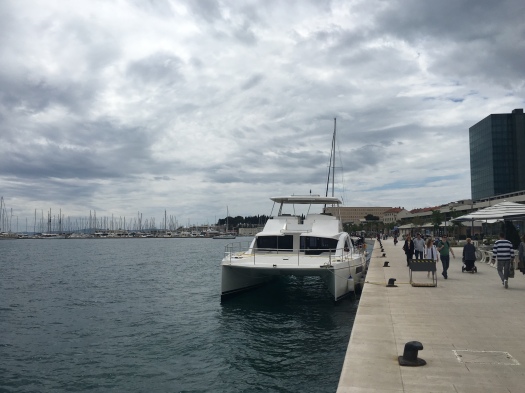 After somehow eating the entire massive plate, I paid up and continued my walk down the marina. There was a nice cement walkway with various bars along the way. I noticed there were some sort of plaques embedded in the path and soon discovered they were honoring all of the Croatian Olympic champions. Very cool. 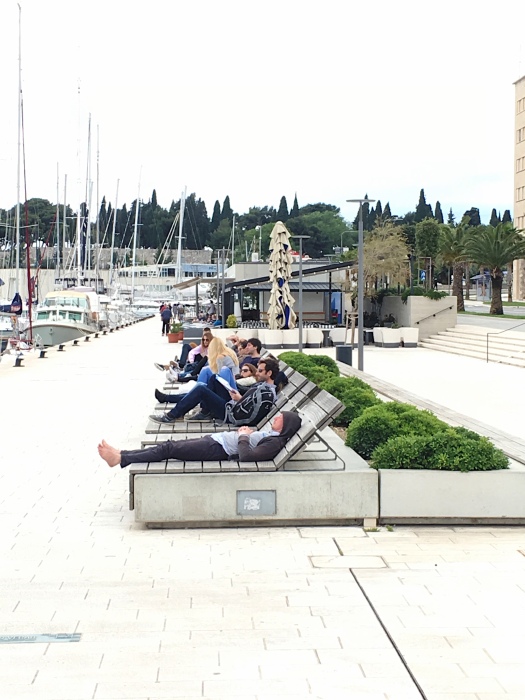 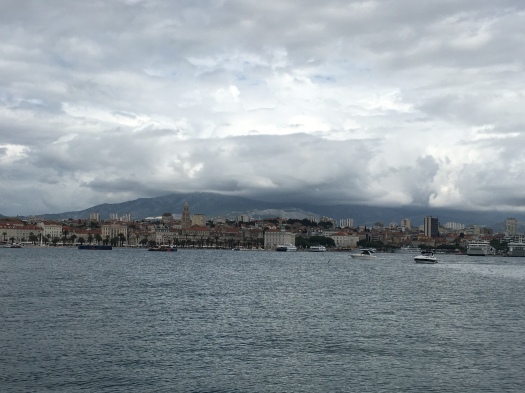 At the end of the marina, the road started heading upwards towards lovely park which was filled with the sounds of chirping birds. My ultimate destination was about a mile up this road – the Mestrovic Gallery.

Mestrovic was Croatian most famous sculptor, including the fantastic sculpture of the 9th century priest Nin at the entryway to the Palace in Split. The gallery was the house that he had built for his family but after living there for 2 years, he was arrested by the Nazis for refusing to support Hitler. He later immigrated to the United States after Tito took power and taught at Syracuse and later Notre Dame.

The trek up the hill wasn’t too strenuous and soon I arrived at the front of the museum with 2 large set of stairs to get to the top. I paused after the first set to walk around the sculpture garden which had several of his bronze works on display.

I then climbed the much larger set, catching my breath at the top. I started to walk inside only to be stopped by a man asking me for my ticket. When I said I didn’t have one, he pointed to the bottom of stairs – crap. Fortunately, after I explained I had just walked from the Palace, he said he would allow me to buy a ticket there. Whew. 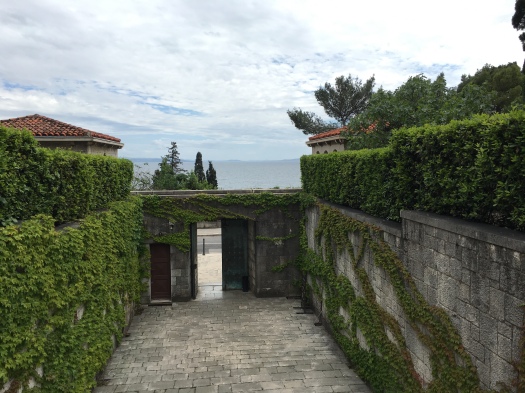 The views from the entrance of the gallery were stunning. I could hear the faint sound of the surf crashing the rocks below and understood why he must have cherished this place so much and how hard it must have been to abandon it because of his nationalistic pride. 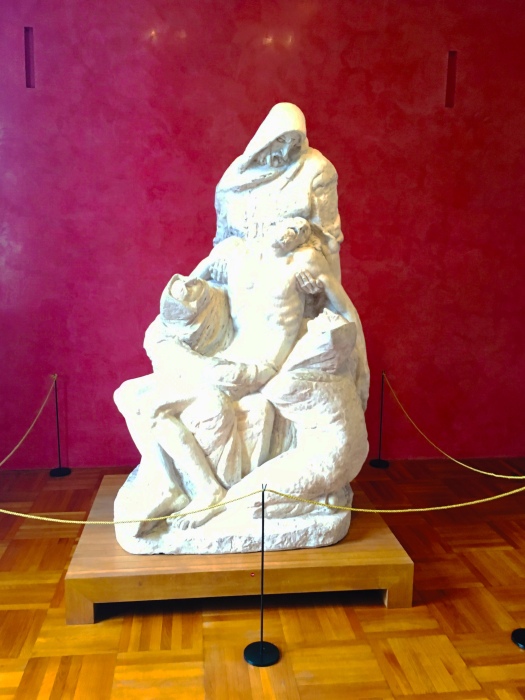 There weren’t a ton of pieces but what was there had been nicely curated, representing the different mediums he used – marble and bronze. The curator told me my ticket also included entry t a chapel down the road where his wooden masterwork resides.

I was especially drawn to this piece of a family, which was very different than his other religious iconography works.
I walked down the stairs and back to the road, where I was told to head about a half mile and the chapel would be on my right. I didn’t see any signs after what I guessed was about the right amount of distance so I asked this old man sitting on a bench. He first replied in Croatian and after that proved fruitless he asked “Spreckenzie Deutsch?”  Since I at least knew a few German words I replied “Jarvol” and he proceeded to give me directions in German. Fortunately that also included some hand gestures so I was able to figure out where to go. 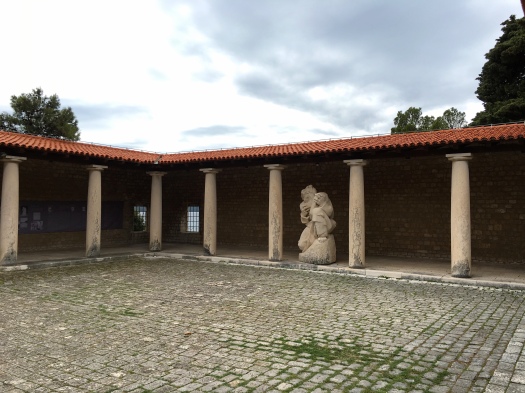 It was eerily quiet when I walked down the pebbled road to the chapel entrance. I appeared to be the only one there. Built originally in the 16th century on a bluff overlooking the Adriatic, Mestrovich had bought it and restored the chapel as best he could. The courtyard contained a large marble statue called “Signaling the Apocalypse.”  Given it was made in 1945 it was pretty obvious why he chose that subject.

The waves crashing below were much more pronounced now and a calm serenity overcame me. Suddenly a man emerged from a small side office and asked if I had a ticket. I showed it to him and he pointed over to the entrance for the chapel.

I walked inside to the beautifully restored room and was greeted by a massive wood Jesus on the cross. On each of the side walls were wooden triptychs, each one depicting scenes from Bible. I stood in the middle, taking it all in for a few minutes and then walked back up the hill. A truly special moment.

As a reward for my pilgrimage, the path back to the Palace was blissfully all downhill and I made it back to the riva in about 30 minutes. I first stopped a wine store I had noticed next to Fife and was pleasantly surprised that their curated collection pretty much matched what I had had so far in Split. I purchased up a bottle of the Bibich R6 Riserva, which was a blend of 6 different Croatian grapes and made the quick walk back into the Palace.

Since I wasn’t able to actually try any wine at the store, I decided to walk over to a place that had caught my eye earlier in the week. Uje Oil Bar was tucked away on a narrow alleyway and since it was just past 4pm, I was the only customer.
It was a combination bar, restaurant and store since they made and sold their own olive oil. I was immediately drawn to an item on the menu called “Olive Oil Experience” which my server explained. consisted of their olive oil, an olive oil butter and olive oil foam along with some homemade bread.

The server told me the story of their family business. How it had started very small and then was seized during the communist takeover. The upside of this came when that collapsed and they were not only able to claim their original land but also purchase the communal land around it giving them over 1000 tress to harvest now.
I saw the wine list included 2 Bibich whites so I asked which he preferred. He said they were very different and offered to give me a taste of each. The first called R5 was like the R6 a blend of local grapes. I didn’t quite know what to make of it as the various grapes were competing with each other. We both agreed it wouldn’t be a good match. The other Debit was a single varietal but again didn’t seem to quite fit with what I was going to have. I finally decided on a different white from Brac, which is also where they make their olive oil.
The olive oil when dipped with the bread was exceptional as was the olive oil foam. However, the real winner was the butter, which with the olive oil added into the churn made it smooth to spread and just an amazingly rich taste. Probably the best butter I’ve ever had. So good that I happily ate it with cold bread, which usually prefer to be toasted.

After a quick siesta and updating this here blog, I made a final nighttime walk down my main pathway to a restaurant I walked past as I entered Dosud. Figa Bar was apparently a local favorite and as soon as I saw the wine list exclusively Bibich, I knew I had chosen wisely for my last supper in Split.

I was pleased to find the R6 was on the list by the glass but it looked like most of them were by the bottle, including the highly coveted SanGreal Merlot. I thought perhaps I could persuade them to let me have a glass but after failed attempts first with my server and the GM, I opted for the R6, which was quite good. 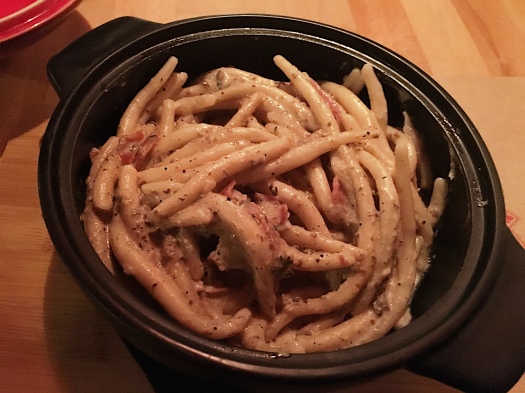 Since Croatia is the land of white truffles, it only made sense to have their homemade bucatini with prosciutto and white truffles. The pasta was a perfect al dente and the rich earthy white truffles went very well with the salty prosciutto. A nice way to end my meals in Split.
As I walked back to my place, I detoured over to Bokeria for a final glass of wine. To my delight, they had the Bibich Grenache but sadly I was soon told they had just run out – d’oh!  When I asked about another wine, I got what had become a common phrase with Croatians when telling me that would be a choice “For me, it’s not so good.”
He recommended a Cabernet Sauvignon from nearby Istra which while not my favorite I had tried was still quite tasty. I said my goodbyes and walked back up the alley to my place. Tomorrow would start far too early as I made my way across the high seas to my next destination, Dubrovnik.
Advertisement