After a relatively peaceful night’s rest and catching up some work, it was time to go exploring.  Santiago had told me about a new outdoor mall that had been built in the formerly abandoned train yard just a block away.  Having often used that as my crossing point from Palermo Hollywood into Palermo Soho when I was temporarily living there, I was shocked to what they done with it. 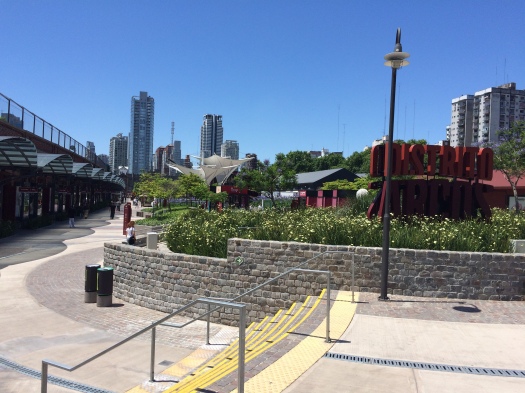 Santiago had noted that while it was considered an outlet mall, in Buenos Aires, that didn’t really mean much – maybe 10-15% discounts.  Given the majority of the stores were ones I could find back in the States, that didn’t really matter as I wasn’t shopping for anything, especially not at places like the Mannequins of the Damned

But first, I needed some food. 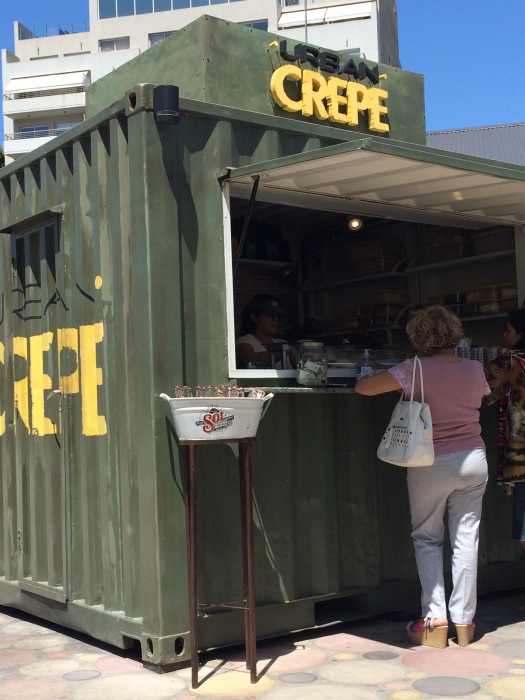 There was a small crepe stand close to the entrance and since I wanted something quick and easy, it sounded good to me.  The structure in what clearly seems to be a trend at least in South America, having seen it Cartegena, Lima and now Buenos Aires, was a former shipping container.  For such a setup though, it made a lot of sense to use something like that for their stand.

I ended up going with the classic ham and cheese crepe, which came in a handy carrying case, although it was way too hot at first to eat that way.  After a few minutes though, it had cooled enough for me to eat and walk around the rest of the complex.  I briefly checked out an interesting wine store outlet, which had a lot of familiar Mendoza wines I had enjoyed in the past.  I decided I would come back later to investigate it further.

A few hours later, I was back in a cab, heading across town to a new (well since I had been here last) restaurant called El Banqueano, which specialized in exotic Argentine game meats and fishes with a modern touch.  It was quite a nice drive, spanning across several of the key Buenos Aires landmarks, from the Obelisk to Teatro Colon.  As we approached one of the oldest parts of the city, San Telmo, the streets turned into rough cobblestone for the last few minutes of the trip.

The restaurant was very traditional looking cafe, dark with lots of red in the interior.  Since I had been able to successfully change $100 into a 14:1 rate for pesos (official being 9.2:1) thanks to Santiago, I decided to splurge a bit and get the 6 wine pairings along with the 8 course meal. 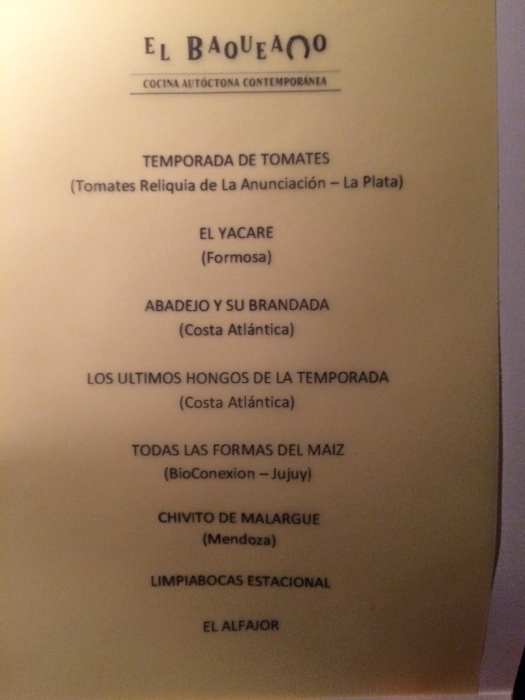 At least from the vague menu descriptions, I couldn’t quite tell the supposed exotic meal that lay ahead but it still looked good to me.

Soon after I sat down, the first wine, a nice rose cava from Mendoza, arrived as a welcome.  This was quickly followed by a choice of breads, one of which was called “mushroom bread” so of course I had to get that.  It definitely had an earthy taste to it and was quite good, especially with the Zuccardi olive oil that accompanied it. 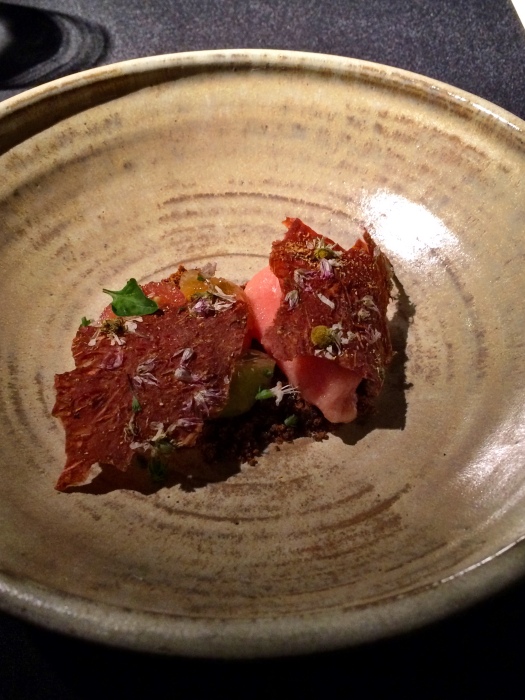 A couple of minutes the first course arrived – “Textures of Tomatoes”  – a tomato sorbet, sliced herloom tomatoes with a tomato broth.  Between my IK dish and this one, perhaps I was starting to turnaround on my relative distaste for cold tomatoes as it was very tasty.  A good start to the meal.

Next up was a Sauvignon Blanc, also from Mendoza.  While a bit too bland for my tastes, it paired nicely with the second course that arrived moments later.

I had to ask my server twice what she had said as I think it was crocodile maki?  Yep, indeed it was.  River crocodile maki with a pure wasabi (as in not very spicy) emulsion with a seaweed sauce.  OK, now the concept of the restaurant was starting to make a lot more sense.  And damned if it didn’t taste just like chicken.  I eagerly gobbled up all 3 pieces in quick succession and could have had another 3 easily.

Next wine was a Chardonnay, also from Mendoza.  Unfortunately, like most from there, it was just OK but really was more again for the pairing with the next course.

The third course was an Atlantic white fish, affectionately known as a “trash fish” with a strawberry “caviar” and sauce.  Fortunately the strawberry taste wasn’t very pronounced and the fish was very tender and well-seasoned.  Not a knockout but a solid dish.

The next wine was actually a twofer of a Torrontes from La Rioja and, surprisingly, a class of chica morrada, a fermented beer-like drink popular in the Andes.  My server explained that one of the cooks is from Peru and this was his complement to the dish.

There are only a few items that make me wince when I see it on a menu, and unfortunately, the next course featured it – tripe as part of “All Parts of the Corn” – which along with the tripe had a corn sauce, masa cake and pieces of corn.  After confirming that yep, I hate tripe, I carefully eat around it and found the rest of the dish to be pretty good. 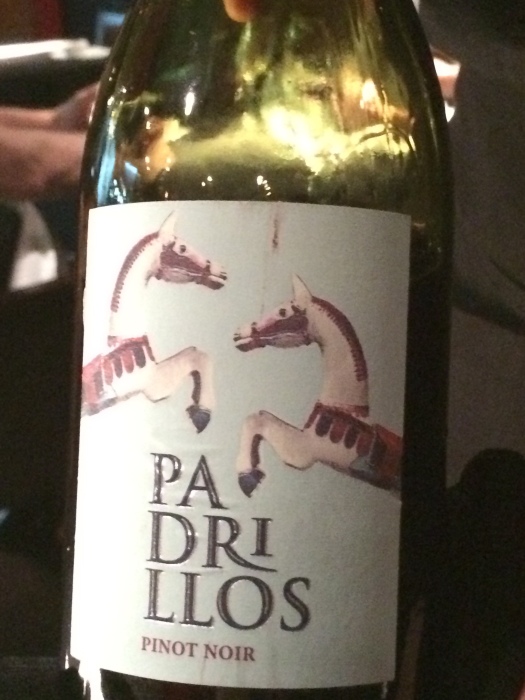 Finally it was on to the reds, with a very nice Pinot Noir from Patagonia.  I had enjoyed a couple of pinots from that region last time I was here and this one was excellent.  So good in fact I ended up asking for another glass, which they happily obliged.

The fifth course was the one I was most looking forward to and even exceeded those expectations – “Mushrooms of the Moment” – a wonderful combination of mushroom sorbet (!), sliced morels, mushroom powder, mushroom cracker with a mushroom puree.  I was surprised it was served cold but this was an absolute stunner for a mushroom fan like me.  Wow.

I assumed a Malbec had to be in the offering at some point and sure it enough one arrived next.  However, since it wasn’t from Mendoza, it didn’t have that robust earthy notes I love so much.  It was kind of a letdown to be honest and even more a headscratcher given the next course.

The sixth course turned out to be a brand new one the chef had been experimenting with – braised chivito (baby goat) from Mendoza with a chivito reduction sauce and kimchi on a black molasses bun.  This was crazy good, super tender meat with a ton of flavor and the spicy crunchy kimchi.  I asked the co-owner, the chef’s wife and sommelier, why she hadn’t paired it with a Mendoza Malbec and she said that truthfully it really should be with a beer.  I agreed. 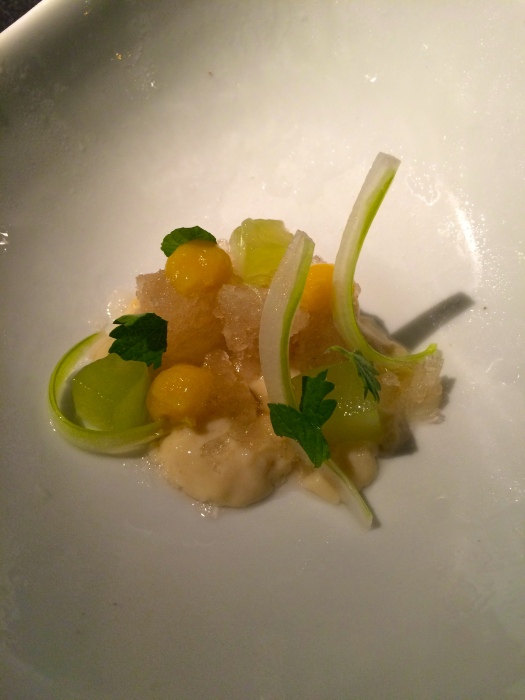 The seventh course was a palette cleanser (no wine pairing) where my server challenged me to name all of the ingredients.  I ended up getting 7 out of 10 correct, nailing the lemon-lime sorbet, mint, parsley, basil, orange and grapefruit but whiffing on the sweet cumcumber, green apple (which was in a sauce that didn’t have the usual sour notes) and olive oil (which c’mon wasn’t really fair!)  Very complex and a great way to wash away the intense flavors of the last course.

The last wine was a real winner, a late harvest Malbec from Mendoza.  Not too sweet but with that wonderful slightly sticky quality, I was a very happy man and once again asked for seconds with this one.

The final course was a deconstructed version of an Argentine classic dessert – El Aljafor. I was encouraged to combine the various elements together to get the familiar taste of the original cake.  A fun and playful way to finish a great meal.

After the last sip of that wonderful late harvest Malbec, I somehow pushed myself away from the table, hailed a cab and staggered back to my apartment.  Tomorrow would be yet another epic meal day plus I had a critical errand to run to fund my adventures so sleep was a must.