My first full day in Prague would be a day of rest and regeneration from the lovely effects of jetlag.  Fortunately, the weather gods had taken pity on me and decided to make it a very rainy day.  From pretty much the time I got up to going to bed later that night there were various levels of rain.  Still, I had to eat at some point but given my state of mind, it had to be close.

Luckily, it turned out that one of the restaurants I had been recommended, Dish Fine Burger Bistro was right around the corner.  I opted for the burger that had a local Movarian cheese and wine poached onions along with some steak fries with rosemary.  Chris opted for the Dish Burger and fries.  Since the beer was actually cheaper than water, I had a local pilsner.

It was pretty much exactly what I needed on a cool, rainy day and as soon as I finished, another wave of tiredness came over me so we headed back to the loft.  Four hours later, I groggily woke up and eventually forced myself to get some dinner.

I once again knew that it would have be a very local place and the owner of the loft suggested Bruxx, a Belgian restaurant only about 5 minutes from here.  It was still raining a bit but the walk was easy enough.

Having had my fill of the lighter beers, this time I opted for Leffe Dark, which was a nice change of pace.  The restaurant was pretty busy and the menu looked promising.  Wanting something I can’t get that often in the States, I selected the leg of rabbit with a Lambic (cherry beer) reduction. 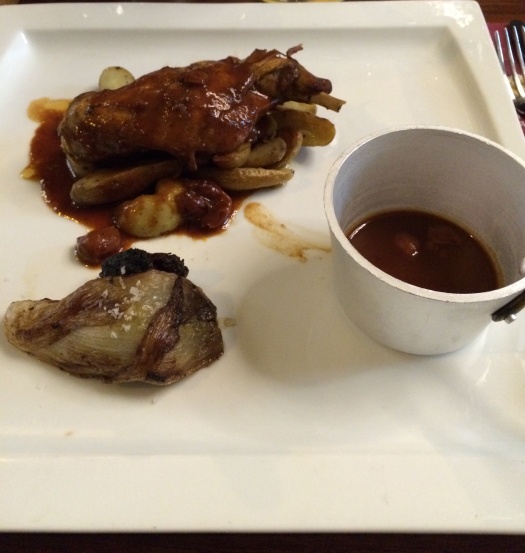 It certainly looked appetizing but the rabbit was far from tender and almost bone dry.  After drinking almost half of my beer to choke down a couple of bites, I decided to send it back.  The waiter was very apologetic and said he would get a new one.  I told Chris that regardless of what I got next time, I would eat it.  While still not really even close to being tender, the second try was better so I was at least able to eat it.

That was just about all of the energy I could muster, so we headed home as tomorrow would be a big walking day.