After back to back long nights, it took a bit of motivation to get at it again.  Fortunately, the proverbial carrot on the stick was the promise of some mind-blowing sushi.  So, despite the lousy weather and our tiredness, we made the pilgrimage back to Shibuya Station to Sushi Midori.

We had been warned about the long lines but had been assured it moves pretty quickly.  Located on the 4th floor of a large mall in the middle of a food court, it was pretty obvious once we got there.  The line extended down a hallway where we joined up with the rest of the people waiting. 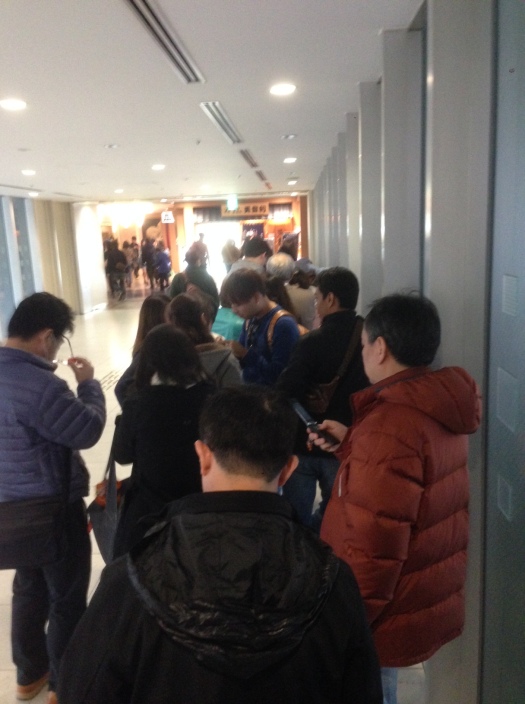 Fortunately as promised, the line did indeed start to move shortly thereafter.  There was apparently a time limit for customers so a steady flow of people were leaving on a fairly regular basis.  After about 45 minutes, we reached the front of the line and were escorted into the restaurant.  It turned out to be a lot larger than I thought, with a huge sushi counter and tables crammed together.  We lucked out and got 2 seats at the very end of the sushi counter and were presented with a menu.  While the pictures themselves looked amazing, the insanely cheap prices explained the long line.

I decided to get the chef’s special and Chris opted for the sushi special.  While we waited for the chef to prepare our dishes, we were given a small salad with a crab paste sauce and chunks of crab meat (delicious), a very tasty miso soup and best of all a superb charwanmushi, which is a savory egg custard with mushrooms. We also watched another chef prepare what seemed to be some ala carte selections for the people next to us. 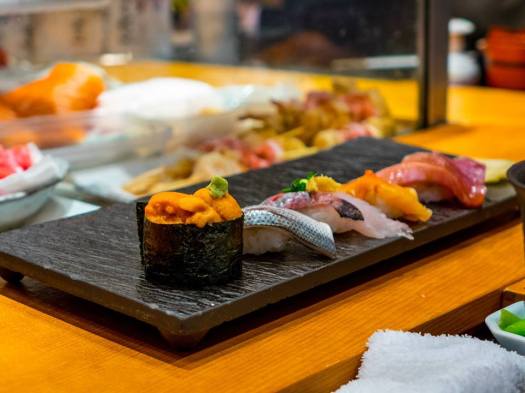 After about 10 agonizing minutes, the chef handed over this work of art to Chris 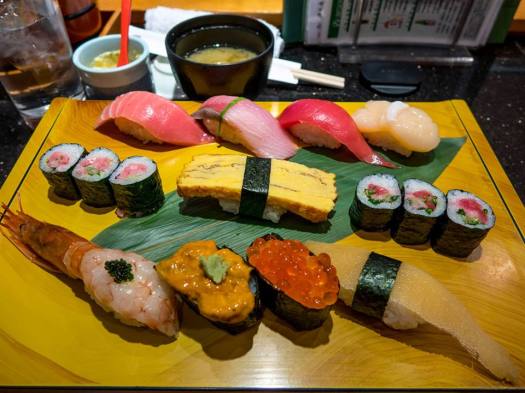 And then mine shortly followed.

Since there was no English explanation of each piece, in a couple of cases I’m not entirely sure of each fish I had but they included yellowtail, salmon roe, a tuna handroll, razor clam, halibut, prawn, egg and a huge slice of cooked eel.  It was far and away the best sushi I had ever tasted.  Each piece of fish essentially melted in my mouth with such a pure, clean flavor.  The rice was slightly warm with just the right amount of wasabi.  Pure heaven.

While I was fairly full, I knew I had to have at least a couple of pieces of the amazing looking salmon that I had seen our chef slicing.  As you can see from the photo, the amount of salmon per piece was absurd and of course turned out to be the best salmon nigir I had ever tasted.  After about 30 minutes, we called for the check and were dumbfounded that all of it added up to only $35 USD!  I left the restaurant gobsmacked and so grateful I got to experience such an amazing meal.