As I’ve talked about previously, puerto cerradas (closed door) restaurants are all the rage in Buenos Aires.  I had read about one that I knew I wanted to check out called Ocho Once so I set up a reservation for Saturday night.  After my usual back and forth about my garlic aversion, I was told to show up at 9PM at a place that turned out to be very close to loft.  As usual, there was no sign or any indication that a restaurant was behind the door of a typical neighborhood flat.

The restaurant was spread out into a series of small rooms, including what I believe must have been the garage at one point. 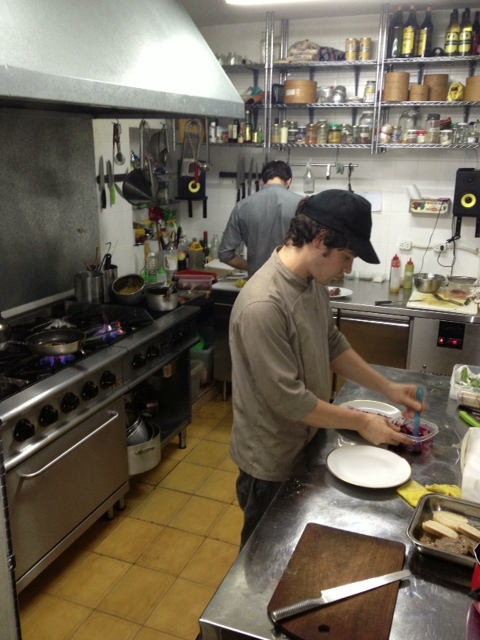 The menu – 5 courses – was only $200 pesos along with $25 pesos for a glass of really good Malbec – a steal.  Unfortunately, due to the low light, the first course, which was a very nice play on ceviche, was not to be documented.  However, the chef, seeing my difficulties trying to get my pics, graciously allowed me to use a flash for the rest of the courses.

Next up was a lemon risotto with grilled sweetbreads.  I’m not a huge sweetbreads fan but these were quite good.  The acid from the lemon was much needed to cut through the richness of the sweetbreads.  This wasn’t my favorite course but I could appreciate the technique and effort that went into it.

The 3rd course was a bit of a palette cleanser – brie with warm strawberries, arugula and balsamic vinegar.  The chef explained that this was to “reset” our mouths, which it did quite nicely. 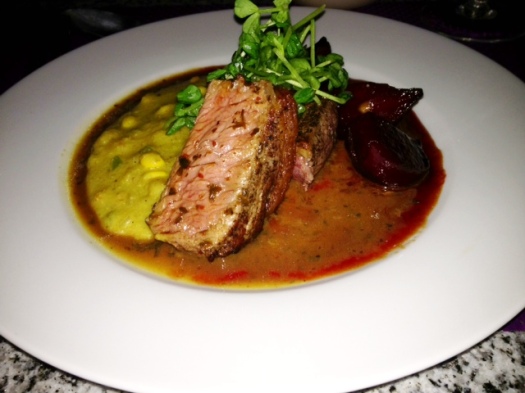 The main course was an organic steak with chimichurri with a Malbec jus and humita (a local corn and potato mash that is used in locro, an Argentine staple.)  The steak was very juicy and tender.  The humita was a nice twist on the usual potato accompaniment with a steak.

Finally, for dessert, the chef brought out a frozen mango cheesecake, grilled peaches and and smear of blackberries.  The cheesecake was a bit tough to eat as it really was frozen – making a loud CLANK every time I tried to cut through.  That sound was heard echoing around the restaurant so I wasn’t the only one having trouble with it.  While I’m not really a mango fan, in this form, it was delicious and the warm peach was delicious as well.

It was another superb meal at any price let alone one this inexpensive.  I will definitely miss being able to have such quality food at a fraction of what I would be paying back in the States.