After some much needed rest, it was finally time to start exploring the new ‘hood.  It turned out that our travels the previous day had us at the very outskirts of Palermo Soho, which was a relief as I wasn’t very impressed with what I saw.  Now heading in the right direction, it became quickly clear why this is such a popular part of Buenos Aires.  The streets are lined with large trees, providing some much needed shade as the temperatures and humidity have climbed rapidly over the past few days. 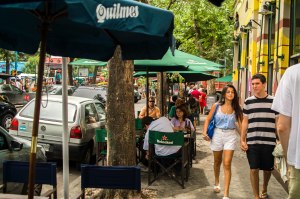 We walked down one of the main streets, which was filled with bars, restaurants and all kinds of cool shops.  I had read that the Plaza Serano was the place to be on Saturdays and that turned out to be true.  The entire plaza had been taken over by vendors peddling their various wares.

The surrounding bars also became satellite shops making the entire Plaza into essentially one big marketplace.  We decided to cool our heels at one of the bars and get some lunch.  I went with the special of the day, which was fair at best and Chris had what he dubbed a deep dish sandwich – no bueno. 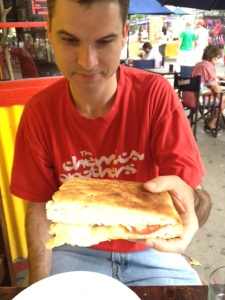 I was suddenly no longer the tallest person in Plaza Serano.  Bastid!

After walking around some more for a couple of hours, we retreated back to the air conditioned loft for a siesta and to recharge for the night ahead.